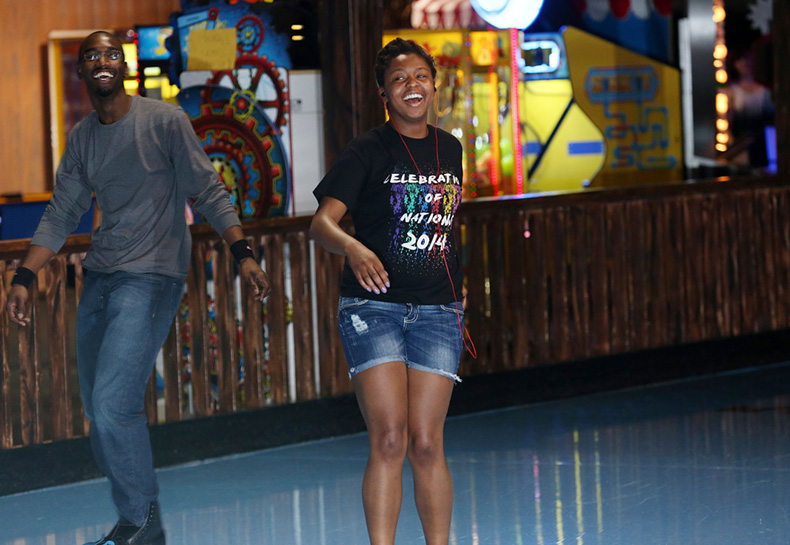 Armaja LaRue-Hill likes to roller skate in her free time at The Zone in Rolla. Sam O’Keefe/Missouri S&T

Armaja LaRue-Hill says that if it weren’t for a crown and sash, she would still be the shy, introverted student she was in the fall of 2014 when she started classes at Missouri S&T. Back then, her introversion kept her from joining campus activities. Now a junior in computer science, LaRue-Hill can’t cross campus without stopping to chat with someone.

In her first semester, LaRue-Hill stepped out of her comfort zone and decided to participate in the Miss Black and Gold Scholarship Pageant hosted by Alpha Phi Alpha fraternity.

“I was just hoping to win the $1,000 scholarship,” she says. “But I ended up having to work on my soft skills like meeting and talking to people. I learned how social I could be.”

Much to her surprise, she won the pageant and was crowned Miss Black and Gold that October.

LaRue-Hill credits her success at Missouri S&T since then to her decision to dive into activities.

“I turned the skills I learned on the road to the crown and sash into real progress,” LaRue-Hill says. “After that, I had the courage to start study groups, talk to new people in my classes and pursue many other things I wouldn’t have considered before.”

The simple, yet sometimes hard-to-employ code LaRue-Hill now lives by is to “dive in.” When she begins a project or homework for a class, she immerses herself in it to produce the best results she can. She also jumps into volunteer activities that allow her to advocate for causes she believes in.

“I learned through the pageant that I like to promote events and things I believe in,” she says. “I like to spend time getting the word out for charitable events.”

When LaRue-Hill isn’t in class, she works in the Leadership and Cultural Programs office. She is a member of the National Society of Black Engineers and Voices of Inspiration choir. She is also vice president of the Association of Computing Machinery-Women and a 2015 Sue Shear Fellow.

“Computers are a work of art because of all the things they can do seamlessly and quickly,” she says. “I want to dive into bridging the gap between the art and the science of computers.”