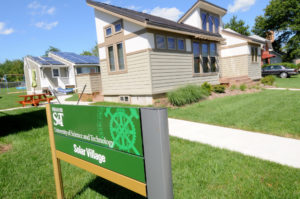 The Missouri S&T Solar Village is an example of a smart grid. Researchers are working on ways to keep such power systems safe, creating algorithms to protect cyber-physical systems.

A Missouri University of Science and Technology researcher is working to produce algorithms for cyber-physical systems (CPS) to help bridge the gap between computational and physical systems in an increasingly interconnected world.

A CPS is a system of collaborating computers that control physical entities, such as power systems. The National Science Foundation awarded a team led by Dr. Jonathan Kimball, associate professor of electrical and computer engineering at Missouri S&T, $333,298 for the project. Also working on the project are Dr. Bruce McMillan, associate dean for research and outreach in the College of Engineering and Computing and a professor of computer science at Missouri S&T; and Dr. Mo-Yuen Chow, professor of electrical and computer engineering at North Carolina State University.

“The vision is to do for electrical power flow what the Internet has done for data,” Kimball says. Unlike the Internet, which isn’t dependent on any one server or system, the nation’s power grid is interconnected, and a failure in one system can cascade down the line.

The team is working on initial algorithms that serve as building blocks for more complex algorithms that researchers use to analyze larger cyber-physical systems. But there are technical, regulatory and legal hurdles to clear — and even more to clear in more sophisticated control systems.

In the future smart grid, individual houses or subdivisions using solar panels or wind energy could sell power to a neighbor or even someone 10 miles away. Such systems begin on the small scale, such as Missouri S&T’s solar village, and can extend to larger systems such as Ameren or Kansas City Power & Light. And water, oil and gas pipelines could be interconnected to maximize energy flow efficiency.

Other aspects of the research could have a more personal connection. Kimball says the work could lead to a system that would allow automobiles to communicate with each other on the nation’s road to maintain the correct distance, speed and braking. In that way, they would operate as one single unit all moving together.

“The future of cyber-physical systems relies on trust between people and subsystems,” Kimball says. “We need a way of establishing trust based on information we can gather. Trust, but verify.”

Secure algorithms ultimately will allow researchers to know if the readings they’re getting are accurate, Kimball says. Warning signals could be a malicious attack or simple damage, but they need to look at them separately to see if one of them is “lying.”

More information on the project can be found on the NSF website.

On September 3, 2015. Posted in College of Engineering and Computing, Electrical and Computer Engineering, Featured, Research