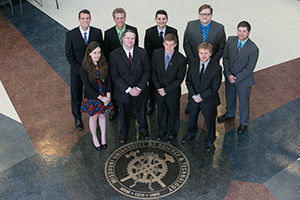 Nine electrical engineering graduates each received a $6,000 Grainger Power Engineering Award from the electrical and computer engineering department at Missouri University of Science and Technology. The awards are presented as a reward for academic excellence.

The Power Engineering Awards are funded by a $1.3 million endowment from The Grainger Foundation of Chicago. Missouri S&T is recognized by Grainger for its ability to attract top students and educate quality engineers and is one of only six universities in the nation chosen to receive such funding.

Each year, the Grainger Power Engineering Award is typically presented to up to 12 electrical engineering graduate and undergraduate students who plan to pursue careers in power engineering. Selection of recipients is based on academic performance, exhibited interest in power engineering and extra-curricular activities.

To be eligible for this year’s award, students must have graduated with degrees in electrical engineering in August or December of 2014 or May 2015 and have emphasized their course work in power engineering. All recipients had significant power engineering experience, either through company internships, research projects or design projects.

2015 recipients of the Power Engineering Awards are:

On August 22, 2015. Posted in Electrical and Computer Engineering, People