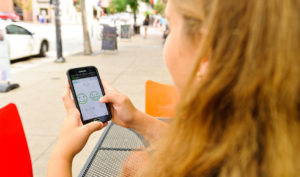 Individuals who are affected by depression now have a new tool to help them: a smartphone application that lets users log their moods and symptoms and share that data with their psychiatrists.

Researchers from Missouri University of Science and Technology, the University of Missouri-Columbia and the Tiger Institute for Health Innovation developed the MoodTrek™ app, which allows patients to log their moods, sleep patterns and activity levels between appointments.

Approximately 16 million American adults are affected by depression. Many patients, however, see a psychiatrist only once every two to three months. The new app is gives patients a sense of how they’re doing on a daily basis. Behavioral health has been linked to factors such as a person’s sleep and exercise levels, and the app helps users recognize what affects their mood.

Dr. Sriram Chellappan, an adjunct professor of computer science at Missouri S&T, worked with Dr. Ganesh Gopalakrishna, M.D., an assistant professor of psychiatry at the MU School of Medicine and a psychiatrist at MU Health Care, to create the app. The two, along with Missouri S&T’s technology transfer and economic development staff, coordinated development of the app with the Tiger Institute.

“Some patients keep a mood diary during their treatment, which can be helpful in assessing their well-being,” says Gopalakrishna. “But I thought that there must be a better way to record moods and activity. That led to the development of the app. People tend to forget what their moods were like just a few days ago, but through this app, I can now see that data and can use it to provide the best care possible.”

Users of the app are able to record their moods on a scale of one to five by selecting the appropriate “smiley face” icon that matches their current feelings.

MoodTrek™ is available for free on Android devices, with plans to bring the app to Apple devices in the future. To download the app, visit: https://play.google.com/store/apps/details?id=com.cerner.moodtrek.

Read more about the app at MU Health Care.