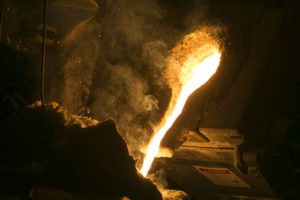 Molten steel is poured in the Missouri S&T foundry in McNutt Hall.

A high-strength steel being developed at Missouri University of Science and Technology could help auto manufacturers in their quest to meet future fuel efficiency requirements.

The development of this new steel, known as a “third-generation advanced high-strength steel,” is under way at Missouri S&T’s Kent D. Peaslee Steel Manufacturing Research Center.

Under the U.S. Department of Transportation’s Corporate Average Fuel Economy (CAFE) regulations, auto manufacturers must improve the fuel efficiency of their vehicles year-by-year through 2020. Regulators have set a tentative goal of increasing fuel efficiency to 54.5 miles per gallon for cars and light trucks by the 2025 model year.

What is called first-generation steel is most commonly used in today’s cars and trucks. A second-generation product has been developed, and it is stronger and more lightweight than the first-generation material, but O’Malley says it is too costly to produce and more difficult to manufacture. The third-generation steel being developed by Missouri S&T metallurgical engineers should be lighter, easier to make and strong enough to address automakers’ safety concerns, he says. 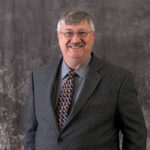 The S&T researchers are employing a method known as TRIP – or transformation-induced plasticity – to obtain the performance required to meet both safety and CAFE goals. It involves the transformation of an unstable crystal structure known as austenite, which normally exists at high temperatures, into martensite, a harder substance that develops as the steel deforms.

The real challenge, however, lies with the large-scale production of these new steels. With the help of industrial partners, the researchers in Missouri S&T’s Peaslee Steel Manufacturing Research Center are examining all aspects of the steel manufacturing – “from melt practice to final formability by the automotive producer,” O’Malley says. A committee of representatives from four steel manufacturers – Nucor, U.S. Steel, AK Steel and ArcelorMittal – oversees the project.

One benefit of conducting the research at Missouri S&T is the ability of researchers to create and test small batches of steel. In S&T’s labs, researchers can create 200 pounds of steel at a time, whereas big steel manufacturers like Nucor, where O’Malley was chief metallurgist before joining S&T, would have to make 170 tons of steel for testing, O’Malley says.