What can be done about a water shortage? 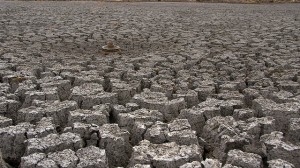 Drought damage on the Fresno Harlen Ranch in Fresno, California, in 2014. USDA photo by Cynthia Mendoza.

The water crisis in the western United States – most notably in California and Washington – may be the most severe and most publicized, but other threats to the nation’s water supply loom, says Dr. Joel Burken, professor of civil and environmental engineering at Missouri University of Science and Technology.

“Most changes in the water cycle cause considerable impacts,” says Burken, who recently served on a National Science Foundation panel to investigate what is called “the water-energy-food nexus.” That NSF panel published a guide (PDF) for further research efforts.

“We have settled in places and undertaken industrial and agricultural activities largely based on water availability,” Burken says. “When that availability changes, we must adapt. If the change is rather rapid, we often face a crisis.”

Noting that parts of Texas are in a prolonged drought, community leaders and individuals there are of necessity “changing the way they view water, including water reuse.”

What can be done to prevent a water crisis in other parts of the country? Shortages may be inevitable due to current water allocation policies. But Burken offers three suggestions to governmental and policy leaders, business leaders, and educators:

On May 20, 2015. Posted in Civil, Architectural and Environmental Engineering, College of Engineering and Computing, Featured, Research, Science & Tech

One thought on “What can be done about a water shortage?”