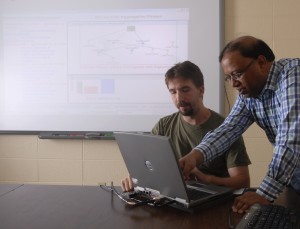 Dr. Sanjay Madria, right, professor and associate chair for research in computer science at Missouri S&T, has received a grant to work on big data management in disaster situations.

Dr. Sanjay Madria, professor and associate chair for research in computer science at Missouri S&T, and researchers at Osaka University received the NSF-JST grant for three years to develop new methods to compress, index and query data in a sensor cloud. NSF and JST reviewed and funded the proposals separately for $300,000 each.

The two agencies awarded the grants to tackle two challenges in disaster management: capturing and processing data associated with disasters; and improving the resilience and responsiveness of emerging computer systems and networks in the face of disasters to facilitate real-time data analytics in their aftermath.

As the project’s principle investigator, Madria is leading his teams “on designing new methods for efficient big data management involving indexing, compressing, querying and analytics over sensor data,” he says. This includes “human sensors, the context and the behavior and sentiments of people to better address the information needed in disaster situations. We are working on methods that are cloud-level scalable in managing, querying and performing analytics.”

Madria says the outcome of his team’s work will benefit research in big data management techniques in disaster applications where response time is crucial.

That’s because, in a disaster, it’s critical that people and response teams have the ability to analyze the huge amounts of data generated in the midst of the disaster and its immediate aftermath. Rapid analyzing can help produce customized warnings for communities, particularly with the ubiquity of mobile phones, their apps and social media platforms.

Dependence on these mobile systems requires resilience and responsiveness during events such as tornadoes, hurricanes or chemical leaks to ensure that real-time data analytics works seamlessly during these disasters. Thus, the key in managing big data is always about understanding and efficient collection of data, scale and accuracy — how fast and how accurately one can collect and analyze.

“We’re proud to collaborate with JST to address the global need for big data and data analysis for disaster management,” said Jim Kurose, head of NSF’s Computer and Information Science and Engineering Directorate. “Collaborative programs such as this one bring diverse perspectives and expertise to bear in mutually synergistic ways on critical problems that impact all of society. These are challenges that no single country can address in isolation.”

Madria’s team was one of six out of 39 proposals that competed for these grants, he says.

On April 24, 2015. Posted in College of Engineering and Computing, Computer Science, Featured, Research