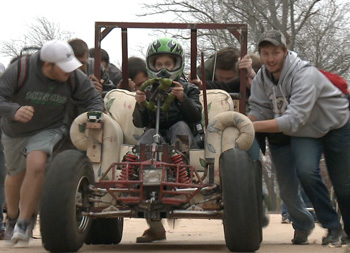 A group of mechanical engineering students at Missouri University of Science and Technology raced couches across the Missouri S&T campus mall as part of their final exam.

Students proposed ideas to Hutcheson, an assistant teaching professor of mechanical and aerospace engineering at Missouri S&T, who reviewed them to make sure they were realistic projects that could be completed in a semester.

Three groups of 20 students chose to build motorized couches. Each team had to keep its project within a $1,000 budget. By the third week of classes, they had started designing vehicles; construction began in late September.

Theodore Quinn of Warson Woods, Missouri, led the winning couch, a loveseat, which finished the race in 10.1 seconds. It was powered by two 6.5 horsepower engines and featured zero-turning-radius steering.

“The brakes didn’t work too well,” Hutcheson says, “but having two motors made it the fastest couch out there.”

Hutcheson says that an hour before the competition two of the three competitors experienced mechanical malfunctions and their vehicles weren’t running. By the start of the race, however, the students had used the problem-solving skills they learned throughout the semester to make modifications and repairs and all three vehicles successfully finished the race.

Hutcheson says the students plan to fix up their couches and drive them in Missouri S&T’s annual St. Pat’s Parade, which will be held Saturday, March 14, in downtown Rolla.

Two other projects were selected as final projects for mechanical engineering Intro to Design this semester – a motorized can crusher and a remote-controlled tank that shoots T-shirts.