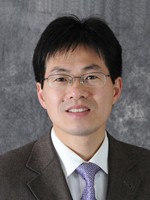 Current methods of separating mixed gases are energy-intensive, costly and inefficient. A chemical engineering professor at Missouri University of Science and Technology is developing a new, energy-efficient adsorbent that will improve common gas separation processes.

With a three-year grant from the National Science Foundation, Dr. Xinhua Liang, assistant professor of chemical and biochemical engineering at Missouri S&T, is devising a way to fine-tune the pore sizes of zeolite-based composite adsorbents to separate gas mixtures that differ in molecule size by only a couple of hundredths of a nanometer.

To separate gases, a change in pressure or temperature pushes a mixture through a porous adsorbent, which acts as a sieve. The diameter of the pores determines if gases will separate or not.

The porous adsorbent material allows one type of gas molecule to pass through the pores and adsorb, but other gases in the mixture – gases with different-sized molecules – cannot pass through the pores. The process then changes pressure to desorb the adsorbed material, and the separation is completed.

Separating gases reduces both waste and the amount of greenhouse gases being released into the atmosphere by recycling the molecules. It also allows both gases taken from a mixture to be used, instead of one being released or burned off.

Liang’s work will reduce the cost of the separation process and save energy by allowing the distillation process to occur at a higher temperature. Distillation is widely used in separation plants to break down atmospheric air into its primary components, typically nitrogen and oxygen. This development in the design of zeolite-based adsorbents could serve as a model for future advances in gas mixture separation processes.

“There is no current membrane to separate gas mixtures like methane and nitrogen while retaining their pure forms because of their size similarity,” says Liang. “The size difference between those two gases is .016 nanometers. With this research, we can tune pore sizes and it can lead to more effective separation of difficult-to-separate gas mixtures.”

Separating methane and nitrogen are both major components in the natural gas industry. Using consistent pore sizes, Liang is able to isolate each individual gas successfully.

“The process should be as energy-efficient and conserving as possible, and that is what this research is achieving,” says Liang. “If successful, this process will play an important role in the chemical industry.”