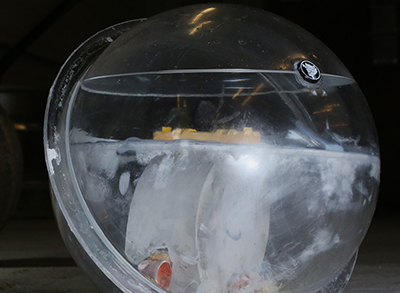 It’s hard to gauge how structurally sound a bridge is when its foundation is buried in a riverbed deep below the water’s surface. New “smart” rocks that are being developed by researchers at Missouri University of Science and Technology will give engineers an accurate, easy and cost-effective tool to monitor a bridge’s foundation, in real time.

The leading cause of bridge collapse in the U.S. is scour, an erosion process where water flow carries away river bed deposits and creates scour holes around the bridge pier or abutment. Floods intensify these scour effects and can quickly make the bridge unstable.

Smart rocks placed at the base of bridge foundations are designed to roll to the deepest point of a scour hole and act as field agents to relay scour depths.

“It’s a simple, but very useful, concept,” says Dr. Genda Chen, principle investigator and professor of civil, architectural and environmental engineering and the Robert W. Abbett Distinguished Chair in Civil Engineering at Missouri S&T. “The rock follows the trail of the scour hole’s progression – as it goes deeper and deeper, the rock will also sink deeper and deeper. One reason we call it ‘smart’ is because the rock can represent the maximum depth of the hole.”

Chen is collaborating on the project with Dr. David Pommerenke, professor of electrical and computer engineering, and Dr. Rosa Zheng, associate professor of electrical and computer engineering. The project is sponsored by the Research and Innovative Technology Administration of the U.S. Department of Transportation and the Missouri Department of Transportation. 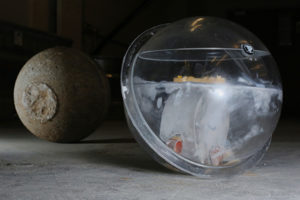 An example of a passive smart rock containing a magnet suspended in liquid is in the foreground. Active smart rocks have embedded electronics. In the background is a concrete-encased smart rock that is about the size of a basketball and weighs about 50 lbs.

“Engineers sometimes complain that these type of devices give them so much data, they don’t know what to do with it all,” says Chen. “These smart rocks can give engineers critical information they need, when they need it.”

Chen says during normal operations, readings are usually taken every six months to a year. “But scour develops very rapidly during flood season,” he says. “If the engineer feels like there might be a new development, they can take a reading at that moment, without being overwhelmed with continual data processing and storage.”

The technology is also cost-effective, says Chen. “You can use this data to evaluate the foundation’s stability without having to send a diver down there.”

Engineers routinely place large rocks around the bridge foundation to protect the soil below from being eroded away by the current, a technique called riprap.

“No one really knows how effective riprap is during flood season,” says Chen. “With the muddy water, you don’t know what’s going on. But if we mix a few smart rocks with the natural rocks around the foundation, the movement of the smart rocks will indicate the performance of the riprap system, and will also tell the engineer if there’s a problem with scour.”

A major concern for scour monitoring is how well the technology holds up during a flood event. “There is a lot of technology that works very well in the lab, but it cannot be applied in field conditions because of damage from strong currents,” Chen says. The researchers are seeing good results with smart rocks deployed in 2012 at Missouri’s Gasconade River Bridge and Roubidoux Creek Bridge. The rocks will last forever and the battery survives about five-to-10 years, depending on how often data is collected, Chen says.

The researchers hope to partner with state departments of transportation for further studies.

“We’d like to engage a few state DOTs to employ a number of smart rocks in their bridges so we can start taking data before and after the flood season to see whether rocks have moved or not,” he says.

“About 60 percent of collapsed bridges in the U.S. are due to hydraulic reasons, of which scour plays a major part,” says Chen.