Three members of the Missouri University of Science and Technology faculty have been chosen to receive President’s Awards, the highest honor bestowed by the University of Missouri System, for excellence among the university’s four mission areas of teaching, research, service and economic development. In all, 11 awards will be presented this year.

Hank Foley, executive vice president for academic affairs at the UM System, presented the awards on Thursday, March 20. Foley, accompanied by faculty, administrators and staff, surprised the recipients. They will be honored at an event in Columbia, Mo., on June 19 with the University of Missouri Board of Curators.

Winners from Missouri S&T include: 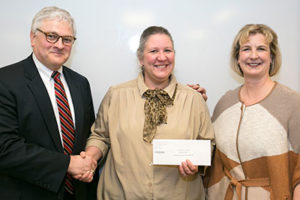 Dr. Mariesa Crow, F. Finley Distinguished Professor of Electrical Engineering at Missouri S&T, recipient of the President’s Award for Leadership, which includes a $5,000 award. The award recognizes faculty who have provided exemplary leadership for one of the four University of Missouri campuses through commitment to excellence and integrity in their leadership roles.

Former dean of the School of Mines, Energy and Earth Resources, Crow proposed the Energy Research and Development Center (ERDC), her brainchild, in 2006, and the center opened its doors in 2007 with Crow as its director. The center conducts energy research in electrical, nuclear, petroleum, chemical, geological, civil and mining engineering disciplines.

Crow served as director of the ERDC until 2012. While directing the ERDC, Crow successfully obtained one of five National Science Foundation grants to establish the Future Renewable Electric Energy Delivery and Management center as part of a collaborative research effort.

In 2013, Crow led the effort to establish Missouri S&T as the lead institution in the Mid-America Regional Microgrid Education and Research Training Center. This $4.3 million center, funded by the Department of Energy, is part of the White House Office of Science and Technology Policy to make solar energy a cost-competitive option by the end of the decade.

Crow is a leader not only through her research, but also through her commitment to diversifying her university and the world of science. Since its inception in 2008, Crow has served as the vice chair of the Female and Underrepresented Minority Recruitment and Retention Committee. During her tenure, female faculty representation has increased from 14 to 18 percent and underrepresented faculty representation has increased from three to six percent. Crow, herself, is a member of the Missouri S&T Women’s Hall of Fame and was named the Missouri S&T Woman of the Year in 2002.

“For female and under-represented faculty at Missouri S&T, Dr. Crow serves as a role model of success, as well as a voice for their concerns and challenges,” wrote one nominator. “Together, Dr. Crow’s many contributions to this area of faculty quality, diversity, morale and productivity are making a noticeable difference and are a valuable investment for the future health of the university.” 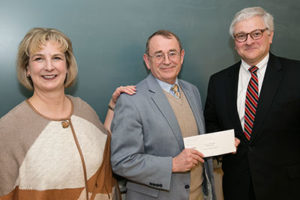 Dr. Larry D. Gragg, Curators’ Teaching Professor of history at Missouri S&T, recipient of the Thomas Jefferson Award, which includes a $10,000 award funded through a grant from the Robert Earll McConnell Foundation. The award recognizes faculty who rise above excellence and demonstrate clear distinction in teaching, research, writing, creative activities and service to the University of Missouri and humankind.

Gragg, who also chairs the history and political science department, is widely recognized by faculty and students for being fiercely devoted to teaching and promoting excellence throughout all departments of the university.

Gragg has taught more than 10 courses on campus, meets individually with most all of his students, fosters independent research with students and consistently mentors professors in his department and others. Gragg also serves the campus by chairing committees such as the Campus Committee on Effective Teaching and the Arts and Sciences Education Task Force.

“Dr. Gragg has a genuine love of learning that marks him as an outstanding academician,” wrote a nominator and mentee of Gragg’s. “His keen interest in me as a person, advancing the status of the university, and giving back to the university community is apparent at every turn.”

Gragg’s research reflects a wide range of intellectual curiosity and has resulted in the publication of seven books and more than three dozen articles. He seeks a broad understanding of American development in his research, and has pursued topics from migration in early America and the Salem witch trials to the English colonization of Barbados and perceptions of Las Vegas in popular culture. 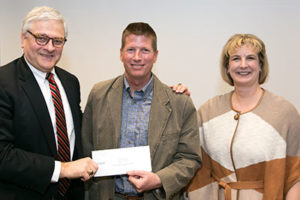 Dr. Curt Elmore, professor of geological engineering at Missouri S&T, recipient of the President’s Award for Cross-Cultural Engagement, which includes a $5,000 award. The award recognizes faculty who promote cross-cultural engagement through education, research and service.

Elmore has a passion for bringing clean water to developing countries. Since 2002, he has taken more than 50 international trips to numerous countries, most of them with students. These trips, many of which are taken with the capstone class Elmore designed, are aimed at helping students recognize the impact they can have across the world through engineering.

Since joining the S&T faculty in 2001, Elmore has worked to create more international engagement outlets for students. He created an International Engineering and Design capstone class, which allows students to investigate and design solutions for water supply problems in Guatemala or Brazil. The course includes three to four weeks in a country where students apply their laboratory knowledge to real-world problems. He also directs the U.S.-Brazil Consortium for Sustainable Drinking Water Studies, sponsored by the U.S. Department of Education, which facilitates student exchange between Missouri S&T and two Brazilian universities.

In an effort to extend students’ thinking globally, Elmore established the Global Studies minor and is in the process of establishing the Humanitarian Engineering and Science minor at Missouri S&T. The programs aim to produce future STEM leaders with broad cross-cultural awareness and an orientation to global service.

One nominator wrote, “He has forever altered and improved the S&T campus and its students’ experiences, changed views and perspective for both students and faculty, and impacted the lives of many peoples internationally, literally saving lives.”