IT helps researchers see their data like never before 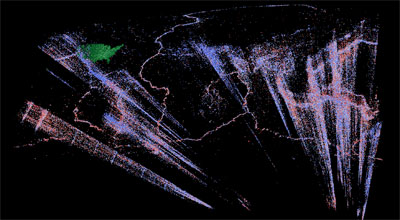 This screenshot from Missouri S&T’s 3-D visualization program V4DiR shows where earthquakes occurred — and how deep into the earth — during a certain time frame. Using V4DiR, S&T researchers can now visualize global earthquake data from 1920 through 2012.

Making sense of the ever-increasing mounds of data is one of the great challenges facing researchers today. At Missouri University of Science and Technology, staff and students in the information technology department have come up with an approach to help researchers gain a new perspective on their data.

The IT research support services (RSS) team at Missouri S&T has developed a tool to help researchers visualize their data. Called Visualizing Four Dimensions in Rolla, the system allows researchers to view their data in 3-D over various time spans.

The system is called V4DiR for short and is pronounced “Vader,” as in Darth. It holds promise for shedding light on various research projects at Missouri S&T and elsewhere, says RSS director Mark Bookout.

On campus, Bookout’s team has been demonstrating V4DiR’s power to researchers by showing maps-in-motion of natural disasters: all of the world’s earthquake occurrences from 1920 through 2012 as well as tornado activity in the U.S. since 1950. The earthquake data is also being used by Dr. Stephen Gao, a professor of geology and geophysics who is studying seismic activity in the Horn of Africa region.

The team also demonstrates V4DiR with a 3-D immersion of a New Mexico mine created by a remote-sensing technology known as LIDAR. With V4DiR it is possible to take a virtual walk-through of the mine, scanning the environment for anything that a researcher is looking for or that may seem out of place.

The RSS team uses projectors, head-mounted displays and a big-screen 3D TV to show off V4DiR’s capabilities. That on-screen visualization – a continuous loop of information – can be manipulated to help researchers home in on specific data points. For instance, the visualization can be tilted on an axis to provide greater levels of depth or various angles. It can also be stopped if researchers want to examine data from a particular time frame.

“We can pinpoint exactly where on the earth, as well as how deep within the earth, an earthquake has happened,” says Nick Eggleston, a junior computer science major from Maysville, Mo., who leads the project. Eggleston is part of a cadre of undergraduate students employed by RSS to develop tools that support Missouri S&T’s computing-intensive research efforts. He is developing a computer program to allow the software to show how data progresses over time. The program will also allow users to manipulate the format of their data and combine similar sets of data.

As impressive as the technology is in its ability to make images out of numbers, another aspect of V4DiR may be even more remarkable, says RSS director Bookout.

“One of the most powerful things to me is to watch how someone who sees it for the first time reacts to the visualization,” Bookout says. “Without exception, the first experience for faculty who see what we can do translates into a ‘Can it do this?’ conversation. Sometimes we hear, ‘I’ve never seen that before’ or even, ‘Uh-oh, what I thought was happening here in the data was wrong. I need to change something.’”

Bookout and undergraduate students demonstrated an earlier version of the system last November at Supercomputing 2012, an international conference for high-performance computing sponsored by the IEEE Computer Society and the Association for Computing Machinery. They plan to show off the system again at this year’s conference.

They also demonstrated V4DiR at the Great Plains Network conference last May in Kansas City, Mo. (S&T is a member of the Great Plains Network, a consortium of universities in the Midwest.) There, Eggleston met a behavioral psychologist who discussed the potential of using V4DiR to visualize data related to her research on how children with autism behave during various times of the day.

“V4DiR has the potential to enhance any sort of research,” Bookout says. “It allows us to use our natural pattern-recognition capabilities to isolate interesting groupings of information. And our association with vendors ensures that we have enough computing horsepower to build and display very large data sets in quick order.”

The RSS team also plans to demonstrate V4DiR on campus at this year’s Research Technology Day, to be held Sept. 9-10 at the Havener Center. The annual conference, now in its third year, is designed to showcase various technology used to support research at Missouri S&T and other campuses in the region.