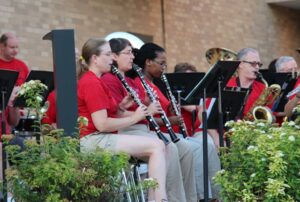 The local musicians of the Rolla Town Band are set to perform their second concert of the summer. Concert goers will hear a variety of pieces from different genres, as well as a section of military-themed marches.

The performance will be held at 7:30 p.m. Thursday, July 11, on the Castleman Hall Green, located at 10th and State streets, on the campus of Missouri University of Science and Technology. The concert is free and open to the public. During the intermission, Phelps County Relay for Life will have a presentation.

“Besides including a selection of marches and overtures, the concert will feature a salute dedicated to the U.S. armed forces,” says Dr. Robert J. Cesario, assistant professor of arts, languages and philosophy at Missouri S&T and conductor of the Rolla Town Band. “The concert will conclude with ‘America the Beautiful’ and ‘Stars and Stripes Forever.’”

The band is still looking for sponsorships for the current season. Interested parties should contact Cesario at 573-341-4698 or cesarior@mst.edu.

On July 8, 2013. Posted in Department of Arts, Languages and Philosophy, Events, Performing Arts