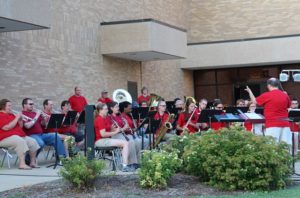 The 85th Army Band will join the Rolla Town Band for its final performance of the summer season. The combination concert will be held at 7:30 p.m. Tuesday, July 16, on the Castleman Hall Green, located at 10th and State streets, on the campus of Missouri University of Science and Technology. The concert is free and open to the public.

The 85th Army Band, led by Chief Warrant Officer James Walker, is moving to Fort Leonard Wood for two weeks of active duty. The concert will feature a number of new pieces for the Rolla Town Band, as well as feature local vocalist Hannah Bagnall.

“Both bands will combine for this concert, playing as one band of 50-60 members,” says conductor Dr. Robert J. Cesario, assistant professor of arts, languages and philosophy at Missouri S&T. “This is a great opportunity for our members to work with these fine players, many of whom are professional musicians and music educators.”

On July 12, 2013. Posted in Department of Arts, Languages and Philosophy, Events, Performing Arts