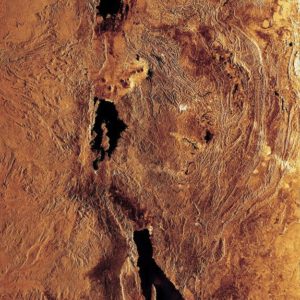 This radar image highlights portions of three of the lakes located in the Western Rift of the Great Rift Valley, a geological fault system of Southwest Asia and East Africa: Lake Edward (top), Lake Kivu (middle) and Lake Tanganyika (bottom). (Photo via ESA)

A giant rift in Eastern Africa is the subject of a study by Missouri University of Science and Technology researchers who want to better understand what tears continents apart.

“All the ocean basins on Earth began as continental rifts, such as those in Eastern Africa, North America’s Rio Grande rift and Asia (the Baikal rift in Siberia),” says Dr. Stephen Gao, a professor of geology and geophysics at Missouri S&T. Gao is leading a research project known as SAFARI (Seismic Arrays for African Rift Initiation) to learn more about how rifts become oceans.

The giant rift in Eastern Africa that Gao is studying was born when Arabia and Africa began pulling away from each other about 26 million to 29 million years ago. Although this rift has grown less than 1 inch (2.54 centimeters) per year, the dramatic results include the formation and ongoing spread of the Red Sea, as well as the East African Rift Valley.

“Yet, in spite of numerous geophysical and geological studies, we still do not know much about the processes that tear open continents and form continental rifts,” Gao told LiveScience. This is partly because research has mostly focused on mature segments of these chasms, as opposed to ones that are still in development, he says.

Gao and his colleagues reported on their research in June 11, 2013, edition of the American Geophysical Union’s newspaper EOS (“Seismic Arrays to Study African Rift Initiation“). Co-authors of the paper include Dr. Kelly H. Liu, professor of geology and geophysics at Missouri S&T, and Missouri S&T graduate students Cory A. Reed and Youqiang Yu, as well as researchers from Oklahoma State University, New Mexico Institute of Mining and Technology, and institutions in Botswana, Malawi, Mozambique and Zambia.

Geodynamic models suggest that below mature rifts, a region called the asthenosphere is upwelling. The asthenosphere is the hotter, weaker, upper part of the mantle that lies below the lithosphere, the planet’s outer, rigid shell. So far, there are two contenders for what might cause this upwelling: anomalies deeper in the mantle or thinning of the lithosphere due to distant stresses.

“One of the techniques that we will use to image the Earth beneath the SAFARI stations is called seismic tomography, which is in principle similar to the X-ray CAT-scan technique used in hospitals,” Gao says. “The only differences are that our sources of the ‘rays’ are earthquakes and man-made explosions, and the receivers are the seismic stations such as the 50 SAFARI stations.”

Altogether, these arrays encompass a length of about 1,550 miles (2,500 km) and are located in four countries — Botswana, Malawi, Mozambique and Zambia.

“I think the project has a positive impact on local communities,” Gao adds. “Some of our 50 SAFARI seismic stations are on local schools, and the teachers and students were excited and were proud about the fact that their school was selected for a high-tech scientific instrument. We believe that this project showed some kids that the outside world is different and even fascinating.”

The arrays will image the areas under the Okavango, Luangwa and Malawi rifts, the southwest and southernmost segments of the East African Rift system. These so-called incipient rifts are not yet mature and could thus shed light on why and how rifting occurs.

“This is the first large-scale project to image the structure and deformation beneath an incipient rift,” Gao said. “The Okavango rift in Botswana is as young as a few tens-of-thousand years, while most other rifts such as the Rio Grande and Baikal rifts are as old as 35 million years.”