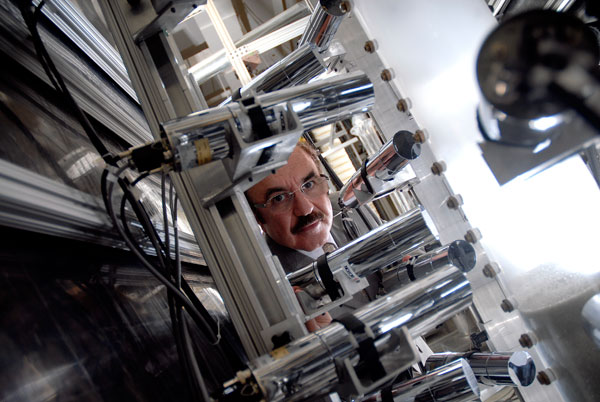 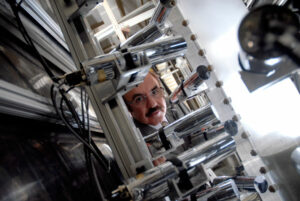 At Missouri University of Science and Technology, where the state’s first nuclear reactor was constructed more than 50 years ago, researchers are tracking and measuring the movement of radioisotopes to develop sophisticated new standards for the next generation of reactors.

Led by Dr. Muthanna Al-Dahhan, chair and professor of chemical and biochemical engineering and professor of nuclear engineering, Missouri S&T is developing new approaches to understanding how nuclear fuel pebbles would behave in what are called “fourth generation” pebble-bed nuclear reactors. These reactors would house uranium fuel in spheres the size of tennis balls (the “pebbles”) rather than rods, and the cores would cooled by helium gas instead of water. These reactors also are considered to be more efficient than water-cooled reactors and would operate at much higher temperatures.

Al-Dahhan is combining a broad array of approaches to measurement, but they fall into two categories:

“These techniques can show us what is going on inside the reactor and can be used to eliminate a lot of experimental work,” says Al-Dahhan. “All of this is related to the design, operation, risk assessment and analysis of future pebble-bed reactors.”

Using what he calls “gamma ray chromatography,” Al-Dahhan is able to view what is going on inside a reactor core, in much the same way that a physician uses ultrasound equipment to view movement within the human body.

“We can visualize the reactor core and the dynamics of how the nuclear fuel particles behave,” Al-Dahhan says. From that data – and via computational fluid dynamics – Al-Dahhan can create models that predict how nuclear fuel pebbles would behave in a pebble-bed nuclear reactor, and how the helium would disperse heat through the process.

While China and South Africa have started building small versions of pebble-bed reactors, the United States has yet to move forward with constructing such plants. In Missouri, Westinghouse Electric Co. announced last October that it would work with Missouri S&T, the University of Missouri-Columbia and the University of Missouri System to explore the feasibility of developing small modular nuclear reactors in the state. The effort also involves Ameren Missouri, which operates Missouri’s only nuclear power plant, the Callaway Energy Center.