Dr. Ganesh Kumar Venayagamoorthy, associate professor of electrical and computer engineering at Missouri University of Science and Technology, will be honored later this month by the Academy of Science of St. Louis for his efforts to develop new ways to intelligently control power grids. 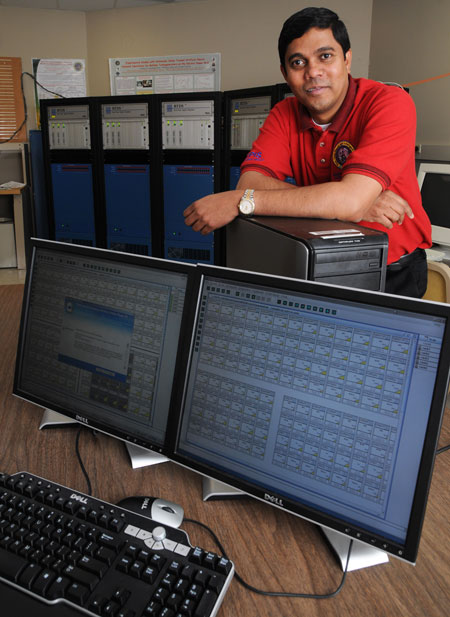 Venayagamoorthy will receive the academy‘s 2010 Outstanding Scientist Award for Innovation for his work in developing brain-like intelligent algorithms that could one day be used to monitor and control power distribution. His work could prove instrumental in the development of an energy-efficient “smart” grid that integrates myriad power sources, such as wind and solar farms, energy storage facilities including plug-in vehicles, self-sustainable community or neighborhood micro-grids, and other non-traditional energy sources.
Venayagamoorthy will receive the award at the academy’s April 22 awards dinner at the Chase Park Plaza Hotel, 212-232 N. Kingshighway in St. Louis.

A member of the Missouri S&T faculty since 2002, Venayagamoorthy’s latest research involves the use living neural networks composed of thousands of brain cells from laboratory rats to control simulated power grids in the lab. From those studies, he hopes to create a “biologically inspired” computer program to manage and control complex power grids in Mexico, Brazil and elsewhere.

“We want to develop a totally new architecture than what exists today,” says Venayagamoorthy, who also founded and directs the Real-Time Power and Intelligent Systems Laboratory at Missouri S&T. “Power systems control is very complex, and the brain is a very flexible, very adaptable network. The brain is really good at handling uncertainties.”

The research is funded through a $2 million grant from the National Science Foundation’s Division of Emerging Frontiers in Research and Innovation.

The Academy of Science of St. Louis award is the latest of several honors for Venayagamoorthy. He is the first Missouri S&T faculty member to receive both a Young Investigator Award from the Office of Naval Research (in 2007) and a CAREER award from the National Science Foundation (in 2004). In 2008, he also was named fellow of the Institution of Engineering Technology, an international professional society based in Great Britain. The IET is the British equivalent to the U.S. professional society IEEE (the Institute for Electrical and Electronics Engineers). Then, in 2009, he was named fellow of the South African Institute of Electrical Engineering.

A senior member of IEEE and the International Neural Network Society, Venayagamoorthy’s main research interests include advanced computational methods for power systems stability and control, smart grid applications, sensor networks and signal processing. He has published more than 360 refereed papers in these areas. Venayagamoorthy is a member of the editorial board of the new IEEE Transactions on Smart Grid.

Prior to joining Missouri S&T, Venayagamoorthy was a senior lecturer at the Durban Institute of Technology, South Africa. He received a bachelor’s degree in electrical and electronic engineering from the Abubakar Tafawa Balewa University in Bauchi, Nigeria, in 1994 and master’s and doctorate degrees in electrical engineering from the University of Natal in Durban, South Africa, in 1999 and 2002, respectively.

In addition, Venayagamoorthy will receive the 2010 IEEE Region 5 Outstanding Member Award April 17 at the regional conference in Grapevine, Texas.