A blue gem for greener fuel

Sapphire, a brilliant blue gemstone most familiar in jewelry, may soon play an important part in making coal a cleaner fuel source. 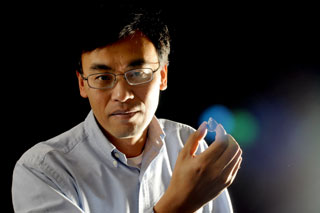 Researchers at Missouri University of Science and Technology are investigating sapphire’s suitability for sensors that could survive the harsh, hot environment of coal-gasification plants, which produces synthesis gas (syngas), a synthetic form of natural gas that can be used as a clean fuel for power generation and transportation.

Sapphire is also a tough mineral and, when grown as single crystal sapphire, is able to withstand extreme temperatures. That’s why the Missouri S&T researchers think it could handle the heat of coal gasification.

One of the roadblocks to the coal gasification technology is the lack of process control instrumentation that can handle the harsh gasification environment. “There’s a huge technology gap for sensing and monitoring in harsh environments in general,” Xiao says. For instance, future spacecraft with power systems that run hot also need tough control systems, Xiao says.

Xiao and his colleagues believe sapphire can take the heat. But they still have to figure out how to turn the crystal into a very small sensor. The researchers want to create sensors that are only about 100 microns in diameter – about the thickness of a human hair. The sensors will take the form of fibers.

The researchers’ first task is to design and build the sensors with the ability to measure temperature as well as gas pressure. They will then conduct laboratory tests on the sensors, then explore the possibility of testing the sensors in actual production facilities. Missouri S&T will work with AmerenUE, a utility company based in St. Louis, to field-test the sensors.

The three-year research project began last October and is funded by the U.S. Department of Energy National Energy Technology Laboratory. Working with Xiao on the project are Dr. H.L. Tsai, professor of mechanical and aerospace engineering at Missouri S&T, and Dr. Junhang Dong, associate professor of chemical and materials engineering at the University of Cincinnati. Assisting the researchers are Ozzie L. Lomax, AmerenUE’s manager of combustion turbine generation, and George Mues, AmerenUE’s principal engineer of research and development.