Solar arrays of the future may be more energy efficient and reliable, thanks to one researcher’s efforts to reconfigure the way panels are connected. 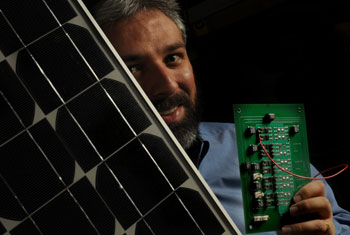 Jonathan Kimball, assistant professor of electrical and computer engineering at Missouri S&T, is working to improve the efficiency of solar arrays by connecting solar panels in parallel, rather than in a series.

Dr. Jonathan Kimball, an assistant professor of electrical and computer engineering at Missouri University of Science and Technology, says the conventional method of connecting solar panels is in a series, one after the other.

But just as one bad bulb in a string of Christmas lights can black out the entire set, so can a single solar panel disrupt the flow of electrical current through the other panels in a series, Kimball says.

“If one of the panels is shaded, dirty or damaged, it affects them all,” Kimball says. “The conventional approach to solar arrays inherently limits the amount of power they produce if there’s any variation in the panels.”

While Kimball’s research is focused on creating a more efficient system to get the most power from solar panels, he points out that cost is still a major factor preventing many people from investing in solar technology.

“Eventually, solar power has got to become cheap enough to compete with electricity generated from other sources,” he says.

A member of the Missouri S&T faculty since January 2008, Kimball co-founded a company, SmartSpark Energy Systems, in 2004 while he was a student and researcher at the University of Illinois at Urbana-Champaign. The company is developing a microinverter architecture to improve reliability of solar power. Kimball retains a small interest in the company, which is now known as SolarBridge Technologies and is based in Austin, Texas.