Research to develop a new method to detect biological and chemical threats may also lead to new approaches for removing pollutants from the environment. 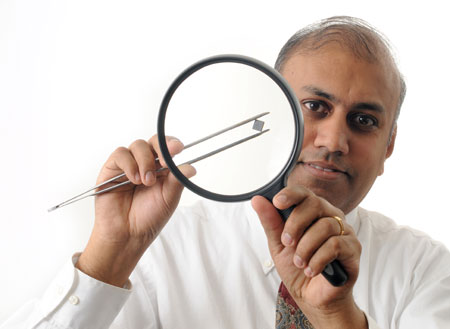 Dr. Jagannathan Sarangapani displays one of the tiny motes developed at Missouri S&T to help the military detect chemical and biological threats.

The research effort, led by Dr. Hai Xiao of Missouri University of Science and Technology, involves the development of tiny sensors – each about the size of a pinhead – that could be used to detect and identify chemical or biological agents. Xiao, an associate professor of electrical and computer engineering, along with colleagues from Missouri S&T and the University of Cincinnati are using a porous crystal known as zeolite to develop the sensors.

Funded through a $529,160 grant from the U.S. Army’s Leonard Wood Institute, the researchers are developing prototypes of the sensors, a process for manufacturing them and a means for deploying them in a battlefield or urban warfare situation.

The zeolite sensors would be deployed in the battlefield via “motes” developed by Xiao’s co-investigator, Dr. Jagannathan Sarangapani, the William A. Rutledge-Emerson Distinguished Professor of Electrical Engineering. These are small, battery-powered devices that would hold perhaps a dozen or so sensors and have the ability to communicate with one another via a wireless network. The motes could also be controlled remotely, allowing soldiers to maintain a safe distance from deadly chemicals.

While the sensors are designed to aid the military, Xiao thinks they may also have environmental benefits. In more concentrated quantities, the absorbent properties of zeolite may make it ideal for cleaning up environmental messes, such as a chemical spill.

“It’s more like a sieve and has been used for molecular separations,” he says. “But because of its large surface area, zeolite also acts as an absorbent for efficient collection of target samples from the environment.”

Xiao’s expertise is in developing sensors for military, energy, industry and biomedical applications, while Dr. H.L. Tsai, a professor of mechanical engineering at Missouri S&T, is an expert in the area of laser fabrication. Working with Tsai is Dr. Junhang Dong, an associate professor of chemical engineering at the University of Cincinnati who is an expert in zeolite materials design and synthesis.

Working with Xiao and Sarangapani is Dr. Sanjeev Agarwal, a research assistant professor of electrical engineering. Agarwal and Sarangapani are developing the distribution system for the sensors.