Dr. Rosa Zheng, assistant professor of electrical and computer engineering at Missouri University of Science and Technology, recently received a CAREER Award from the National Science Foundation to support her work on improving underwater wireless communications. 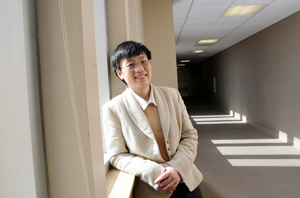 The same acoustic waves that dolphins and whales use to communicate when they are thousands of miles apart can be used by humans to transmit information wirelessly, says Zheng. Her research focuses on shallow water communications, a tool needed for environmental monitoring and other efforts. Shallow water communication is faced with additional challenges because signals are affected by waves and reflections off the ocean’s top and bottom surfaces.

The CAREER Award is NSF’s most prestigious award given to assistant professors in tenure-track positions. The CAREER program recognizes and supports the early career development activities of those teachers and scholars who are to become the academic leaders of the 21st century.
Zheng will receive $400,000 from the NSF over the course of five years to investigate how the reliability and data rate of acoustic waves can be improved. “The most difficult thing about acoustic communication is that a slight increase in range can reduce the data rate significantly, but we do not want to simply increase the transmission power,” Zheng explains.

Zheng, in collaboration with the Woods Hole Oceanographic Institution and the U.S. Naval Research Laboratory, has already conducted three ocean experiments using new transceiver designs. The results of those experiments are very promising, showing significant reductions in error rates and increasing the data rate by 10 times, she says.

With the CAREER Award funding, Zheng plans to use a cross-layer design between physical and network layers to achieve the overall high performance of underwater communication networks, build a field programmable gate array hardware test bed for the designed transceivers, and conduct further ocean experiments.