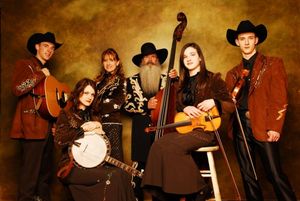 Cherryholmes did not exist prior to 1999, and half of its youthful members hadn’t even picked up an instrument. In 2005, the high-energy Nashville-based band was named the International Bluegrass Music Association’s Entertainers of the Year.

Cherryholmes has received many industry nominations and awards, including a Grammy nomination in 2006 for their first commercial release “Cherryholmes.” Their second release, “Cherryholmes ll,” debuted in the number one spot on the Billboard charts in June 2007. Cherryholmes has also become a regular performer at the historic Grand Ole Opry.

Tickets are $30 for adults and $25 for students. For more information about Leach Theatre events, call the Leach Theatre Box Office at 573-341-4219.

Cherryholmes is presented in sponsorship with Arts Rolla!.