Missouri S&T Chancellor Cheryl B. Schrader will discuss the importance of a college education with students from Houston Middle School in Houston, Missouri, on Friday, Nov. 6, as part of the Show Me Value Tour, a statewide initiative by University of Missouri System leaders. Schrader will visit Houston Middle School at 10:20 a.m. to speak with […]

Dr. Cheryl B. Schrader, chancellor of Missouri University of Science and Technology, will tour Steelville Manufacturing Co. and visit Steelville Middle School on Thursday, April 2, as part of the Show Me Value Tour, a statewide initiative by University of Missouri System leaders to discuss the importance of a college education. 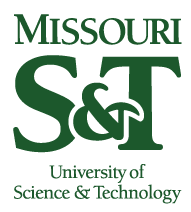 Four Missouri University of Science and Technology staff members were honored today for their leadership, strategic vision and efforts to implement the university’s strategic plan, “Rising to the Challenge: Missouri S&T’s Strategy for Success.” 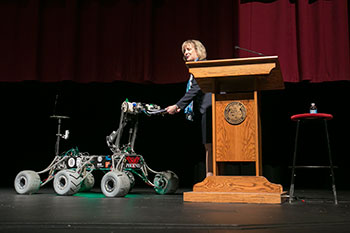 Missouri University of Science and Technology plans to boost the number of doctoral students and invest in two of Missouri S&T’s four best-in-class or “signature” areas through additional state funding, Missouri S&T Chancellor Cheryl B. Schrader announced today (Wednesday, Oct. 8) during her State of the University Address.

The fall 2013 enrollment at Missouri University of Science and Technology, officially recorded at the end of the semester’s fourth week, is 8,130 students. This is the highest enrollment in the university’s history, up 6.3 percent from the official fall 2012 figure, says Deanne Jackson, Missouri S&T registrar.