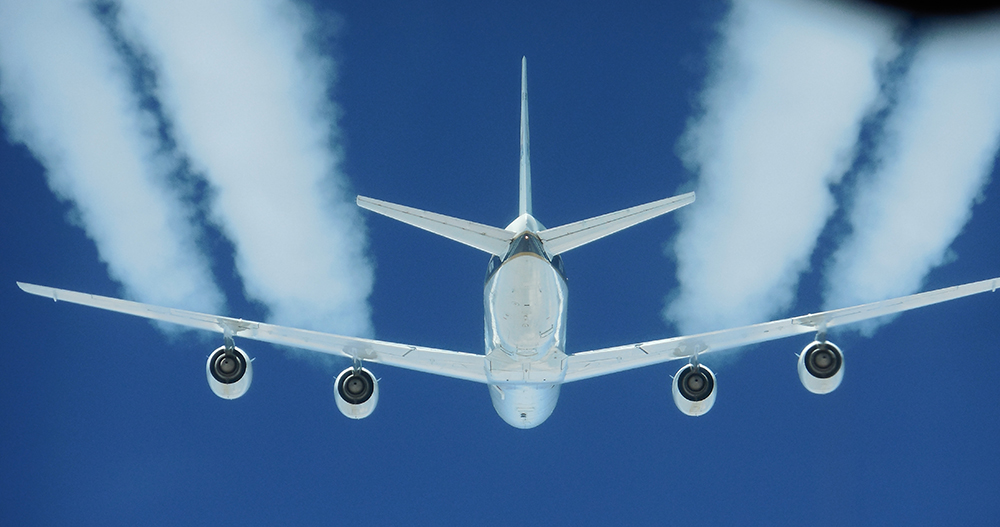 Dr. Philip Whitefield, Curators’ Distinguished Professor emeritus of chemistry at Missouri S&T, received the funding through the FAA’s Aviation Sustainability Center (ASCENT), which is part of the FAA’s Air Transportation Center of Excellence for Alterative Jet Fuels and Environment.

Through the grant, Whitefield will measure emissions from aircraft engines that burn sustainable aviation fuels (SAFs) to determine their potential effect on the environment. SAFs are made entirely from renewable sources such as biomass or, more frequently, contain a mix of renewable and conventional petroleum-based fuel. SAFs could potentially perform as well as petroleum-based jet fuel but have a smaller carbon footprint. Transitioning to SAFs could help airlines reduce their environmental impact, Whitefield says.

“When you look at aviation’s impact on the climate, the most uncertain contribution has to do with the contrails that form from jet engine emissions,” Whitefield says. “Over the years we’ve generated a tremendous amount of data on what happens with conventional jet fuel, but we don’t know what the best type of alternative fuel for would be reducing climate impact.”

For this study, Whitefield and his team will study emissions from four alternative fuels in the combustor – that part of the engine where combustion takes place – and at the engine exit plane where the exhaust is released into the atmosphere. The Missouri S&T researchers are working with the GE Aircraft Engines unit of General Electric Co. in Cincinnati, Ohio, to conduct the tests. “We will be testing with actual, advanced jet engines with the large quantities of fuel it takes to operate them,” Whitefield says.

To measure the nvPMs of these various fuels, Whitefield will follow the standard methods he and his team at Missouri S&T helped to develop for the aviation engine industry and regulatory agencies, the FAA and U.S. Environmental Protection Agency.

“Evidence to date shows that it’s worth pursuing these measurements,” Whitefield says. “We’ve seen remarkable reductions in particulate matter emissions through the use of alternative fuels.”

The airline industry has been using sustainable aviation fuels for more than a decade. The U.S. Department of Energy’s Office of Energy Efficiency and Renewable Energy estimates enough biomass can be collected annually from various sources, including corn grain, oil seeds, algae and wood mill waste, to produce up to 60 billion gallons of low-carbon biofuels for aviation.

Whitefield and his team at Missouri S&T have been international leaders in the study of particulate emissions. In 2003, S&T became a founding member of the FAA’s Air Center of Excellence – the Partnership for Air Transportation Noise and Emissions Reduction which in 2014 became the Transportation Center of Excellence for Alterative Jet Fuels and Environment. In 2011, S&T researchers published a study showing a mix of conventional and alternative fuels can cut nvPM emissions from a plane’s engine by nearly 40%, and in 2018, Whitefield and Dr. Donald E. Hagen, professor emeritus of physics, co-authored the first industry-wide report on sustainable jet fuel emissions.

Missouri University of Science and Technology (Missouri S&T) is a STEM-focused research university of approximately 7,000 students. Part of the four-campus University of Missouri System and located in Rolla, Missouri, Missouri S&T offers 101 degree programs in 40 areas of study and is among the nation’s top 10 universities for return on investment, according to Business Insider. S&T also is home to the Kummer Institute, made possible by a $300 million gift from Fred and June Kummer. For more information about Missouri S&T, visit www.mst.edu.

On October 25, 2022. Posted in College of Arts, Sciences, and Education, Department of Chemistry, email, News, Research