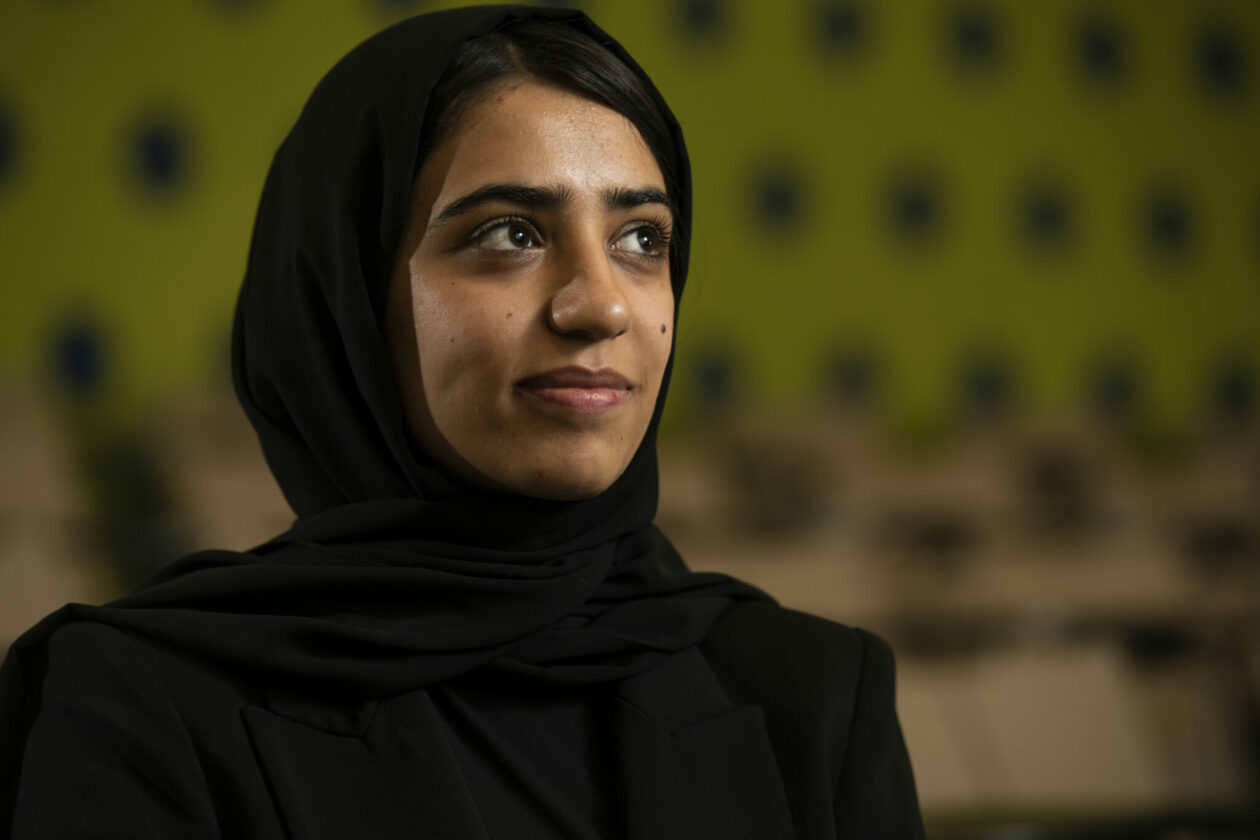 Somaya Faruqi, a first-year student at Missouri S&T, is hoping to earn a mechanical engineering degree and return to Afghanistan to teach at a university. Photo by Michael Pierce, Missouri S&T.

A year ago, Somaya Faruqi huddled in desperation with thousands of other Afghans inside Hamid Karzai airport in Kabul, Afghanistan, frantically trying to get a flight out of the country after the Taliban returned to power. Today, Faruqi is a first-year student at Missouri S&T, where she plans to major in mechanical engineering. She would like to one day return to Afghanistan to teach at a university.

Faruqi was halfway through her senior year in high school and captain of Afghanistan’s first all-female robotics team, widely known as the Afghan Dreamers, when the Taliban banned education for girls after sixth grade. Desperate to leave the country, she and other team members spent two days with their mentor at the airport in Kabul, but there were no flights for them.

“It was impossible,” says Faruqi. “We could hear guns firing. There were corpses in the streets.”

Faruqi says on the third day, the team moved to a Kabul hotel, and the Qatar Ministry of Foreign Affairs was able to get them a military flight to safety in Doha, Qatar. Once there, Faruqi was able to continue her education at Education City, a large campus composed of multiple educational and research institutes. She also continued working with robots.

“I have been captain of my robotics team from 2019 to now, and I would definitely like to join a robotics team here,” says Faruqi. “My biggest goal at S&T is to work in nanobots so that I can teach mechanical engineering at a university in Afghanistan.”

Faruqi says public Afghan universities do not currently have female faculty, but she hopes that will change in the next four years.

“I want to prove to the new government of Afghanistan that gender doesn’t matter,” says Faruqi. “If you have talent, if you have the opportunity and potential, you can make a positive change.”

For now, Faruqi plans to focus on her mechanical engineering studies, inspired by her father, who worked as a car mechanic in Afghanistan before the family relocated to California. She says she helped him work on cars at home in Herat. His shop is also where she learned to build inventions. Her robotics team has a list of inventions to its credit.

“We developed a ventilator to help COVID patients at the request of the ex-governor of Herat, along with a robot that uses UV light to kill viruses and another that can spray disinfectant,” Faruqi says. “We developed a drone that can map areas for security, and we built a metal-detecting robot that can find unexploded mines. The police officers in Herat City asked us to do this.”

Faruqi adds that the team built a robot to help women harvest saffron, a spice collected by hand from the female portion – known as stigmas – of crocus flowers. She says the team developed another robot that cuts, collects and processes wheat.

Faruqi says her team started with six members – girls whose families allowed them to get passports to compete internationally. She says before the first competition there were many negative comments about the team on social media. But when they returned home, most of the comments were positive and more girls could easily get permission from their families to join the team. Faruqi says team membership has grown from those original six girls to more than 250.

Along the way, the team has garnered international recognition for its accomplishments. Faruqi says they were the youngest honorees in Forbes 30 under 30 in 2021 and were among Vogue’s 20 under 20. Faruqi was named one of the BBC’s 100 inspirational and influential women in 2020. UNICEF named her a hidden hero and a teen activist.

“We should believe in ourselves. If we have a dream, we should have belief,” Faruqi says. “Once the belief is killed, the dream is killed. When we have belief, nothing can stop us.”

6 thoughts on “Keeping the dream alive”