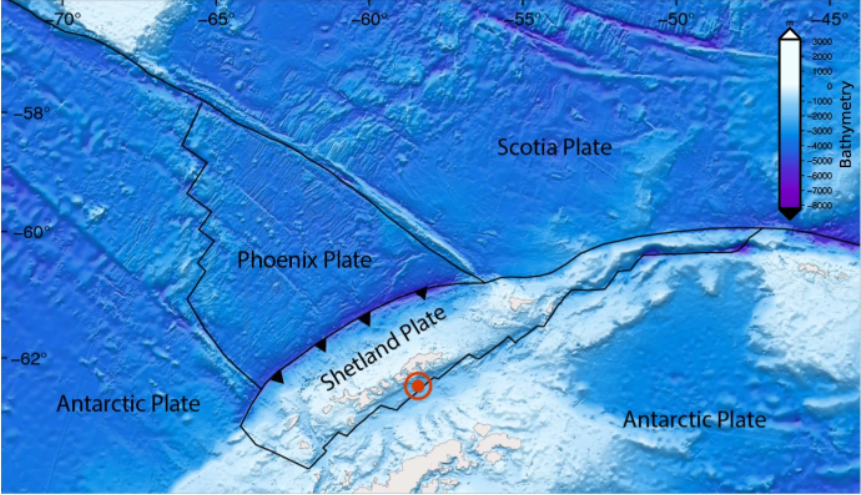 A map of the region of Antarctica where the earthquake swarm was detected. The red circle denotes the swarm’s location. Image from Nature Communications Earth & Environment.

A Missouri S&T postdoctoral fellow is part of an international team of researchers that recently detected a massive series of earthquakes – known as an earthquake swarm – in Antarctica.

The research, published last month in the Nature journal Communications Earth & Environment, indicates that the earthquake swarm was likely the result of a long-dormant volcano awakening. Dr. Sanaz Vajedian, a postdoctoral fellow in Missouri S&T’s department of geosciences and geological and petroleum engineering, is one of 13 co-authors of the study.

Earthquake swarms occur in a relatively short period of time and in a concentrated area but do not create a strong shock. According to the study, the swarm affected the Bransfield Strait, a body of water located between the northwestern tip of the Antarctic Peninsula and the South Shetland Islands.

The swarm began in August 2020 with 128 earthquakes and peaked with two large events on Oct. 2 and Nov. 6, 2020. The series of earthquakes then tapered off until, by February 2021, seismic activity was reduced significantly. About 85,000 earthquakes were recorded over the course of the swarm. It was the most intense earthquake activity ever recorded in the region.

The quakes occurred close to the Orca underwater volcano, which scientists had considered to be inactive. The researchers believe the volcano may have erupted at the time of the Nov. 6 earthquake, which measured 6.0 on the moment magnitude (Mw) scale. Mw readings are similar to those of the Richter scale.

The researchers used a variety of methods to track the swarm and its effects. One method involved data from Sentinel-1, a European Space Agency radar-imaging satellite. For this study, Vajedian processed satellite data to develop time-series maps that showed how the quakes resulted in surface deformations.

Vajedian holds a Ph.D. in remote sensing and geodesy from the University of Tehran. She worked on this research while at Leibniz University Hannover in Germany.

In addition to Vajedian, the international team of researchers involved in the study come from the GFZ German Research Centre for Geosciences Potsdam in Germany, the Italian National Institute of Oceanography and Applied Geophysics, the Polish Academy of Sciences’ Institute of Geophysics, and the German Aerospace Center.

On May 3, 2022. Posted in email, Geology & Geophysics, Geosciences and Geological and Petroleum Engineering, News, Research