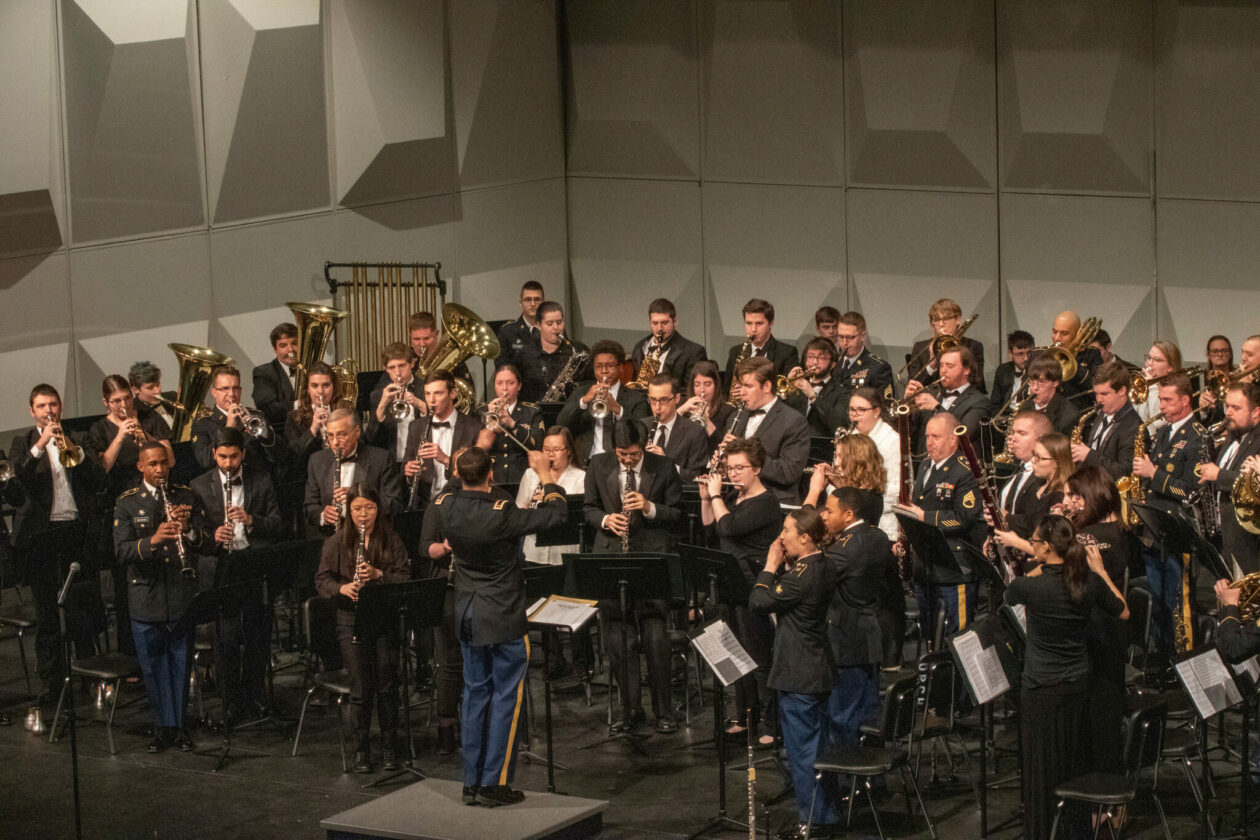 S&T Symphonic Band and Wind Symphony performing with members of the 399th Army Band at Leach Theatre in 2020. Photo by Autumn Buesking/Missouri S&T.

Members from the 399th Army Band from Fort Leonard Wood will join the Missouri S&T Symphonic Band and Wind Symphony for a free concert this February.

The performance will begin at 2 p.m. Sunday, Feb. 27 in Leach Theatre in Castleman Hall, located on the Missouri S&T campus at the corner of 10th and Main streets in Rolla. The concert will feature performances by community members and students in the Missouri S&T Symphonic Band, directed by Dr. David Samson, assistant professor of music at S&T. The University Wind Symphony will be joined by members of the 399th Army Band, directed by Samson and Warrant Officer Brian Dorgan. The concert will also feature members of the 399th Army Band performing in a brass quintet and a woodwind quintet.

The ensembles will perform a wide variety of music, including “Luminance” by Gary D. Ziek; “Metamorphosis” by Andrew Boysen Jr.; “Carmen Suite for Wind Quintet” by Georges Bizet, arranged by Mark Miller; “Gandalf” from “Symphony No. 1 ‘The Lord of the Rings’” by Johan de Meij; and “Light Cavalry Overture” by Franz von Suppe, arranged by Henry Fillmore.

“The Missouri S&T Band Program is pleased to welcome back the 399th Army Band with their new commander, Mr. Brian Dorgan,” says Samson. “The band looks forward to presenting our first concert of the semester and we especially enjoy our concerts with the 399th. I hope to see many in the community come help us celebrate our 10th year of this collaboration.”

The concert is free to attend, and no tickets are required.

For more information about the concert or Missouri S&T’s performing arts programs, call the arts, languages, and philosophy department at 573-341-4185.

On February 17, 2022. Posted in College of Arts, Sciences, and Business, Department of Arts, Languages and Philosophy, Events