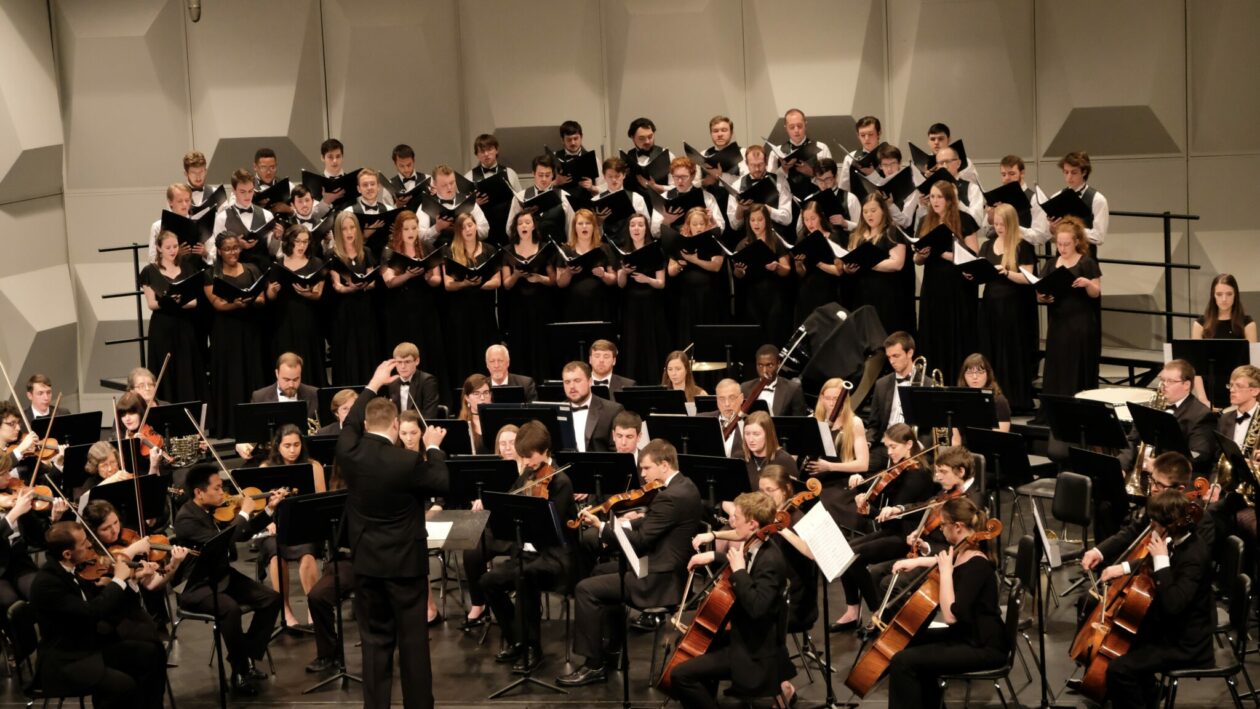 Missouri University of Science and Technology’s arts, languages, and philosophy department will present the world premiere of “Da Vinci at the River,” a newly commissioned cantata for orchestra, choir, and solo bass. The cantata was written to commemorate S&T’s 150th anniversary and funded in part by one of several mini-grants for the year-long celebration. Photo courtesy of John Francis.

This December, Missouri University of Science and Technology’s arts, languages, and philosophy department will present the world premiere of “Da Vinci at the River,” a newly commissioned cantata for orchestra, choir, and solo bass, that was written to commemorate S&T’s 150th anniversary and funded in part by one of several mini-grants for the year-long celebration.

The performance, which features orchestra, choir and bass solo, will be held at 2 p.m. Sunday, Dec. 5, in Leach Theatre of Castleman Hall, located at the corner of 10th and Main Streets on the S&T campus. It will also be live streamed on YouTube.

In “Da Vinci at the River,” an ancient power conjures the ghost of Leonardo da Vinci and demands the construction of a machine. The ghost of da Vinci, however, is overcome by a sense of doubt in which he will languish for more than a century, caught between innovation and purpose, forced to reflect on both his great deeds and his unfinished promises in life.

The cantata is a battle between the insistence of the chorus and the reluctance of da Vinci, performed by local baritone John Francis, to do its bidding.

“I wanted to explore what happens when the idea of innovation becomes a burden on the creator,” says Taylor Gruenloh, assistant teaching professor in arts, languages and philosophy, who wrote the libretto. “What happens to the bodies of workers when the demands of production become too extreme? Are we approaching a time when industry will own a person’s soul after the body has failed? For me, this is a tragedy.”

Dr. Kyle Wernke, assistant teaching professor of music, composed the music. “It has been an immense joy to spend the last year with the da Vinci we meet in Taylor Gruenloh’s extraordinary libretto,” he says. “The purpose of a cantata is to tell a story through music. This story lends itself beautifully to a musical realization. As someone who is remembered in equal parts for their inventions, study of science, and magnificent paintings, da Vinci is representative of S&T’s spirit.”

Lorie Francis, associate teaching professor of music, describes the score as a series of beautiful musical moments that will be enjoyed by listeners and performers alike. “The text is powerful while the music is challenging,” she says. “The S&T choirs have enjoyed working on the music and are excited to be a part of this project.”

Tickets are $5 in advance, $7 at the door and free to youth age 18 and under and Missouri S&T students with a valid ID. Tickets can be purchased at the Leach Theatre Box Office, located inside the main entrance of Castleman Hall, facing 10th Street. The Leach Theatre Box Office is open 10 a.m.-4 p.m. Monday through Friday. Tickets can also be purchased online at leachtheatre.mst.edu or by calling 573-341-4219. Service fees may apply to tickets purchased online or by phone.

For more information on the performance or Missouri S&T’s performing arts programs, contact the arts, languages, and philosophy department by phone at 573-341-4185 or by email at alp@mst.edu.

On November 17, 2021. Posted in Department of Arts, Languages and Philosophy, Events, Performing Arts