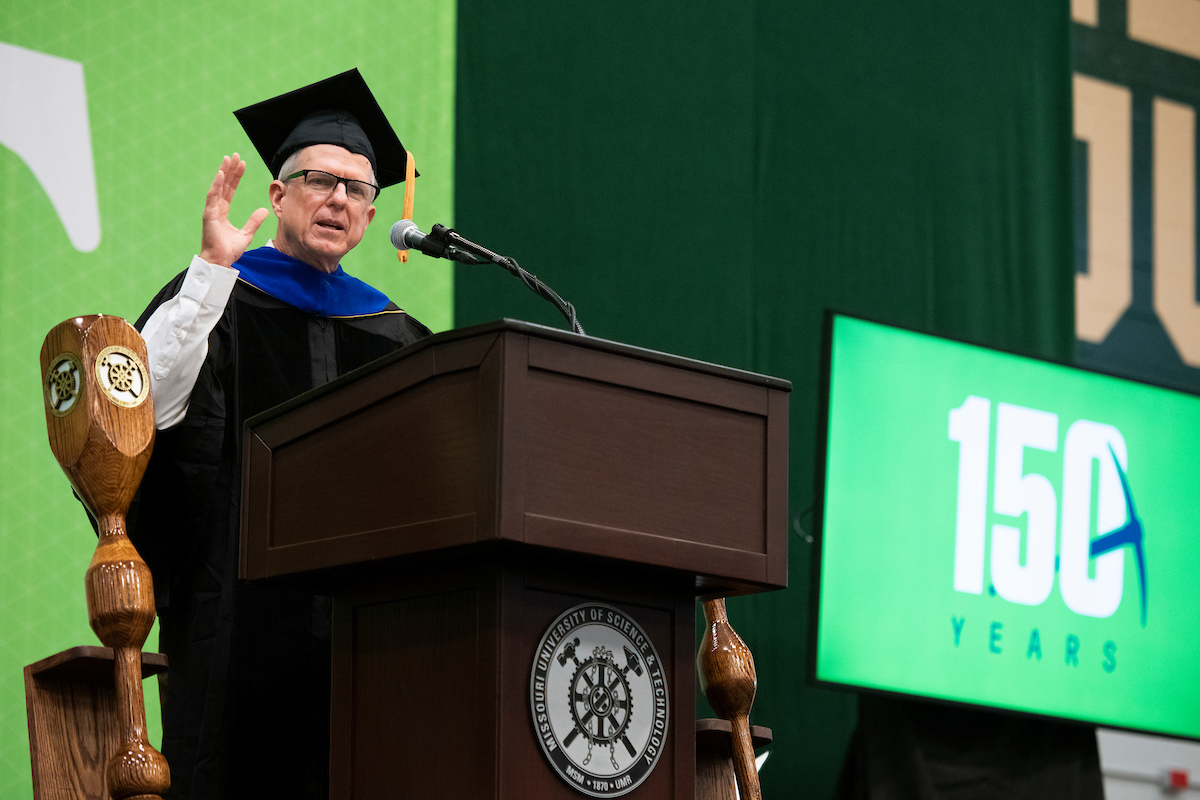 Warmack, principal at Warmack and Co. LLC and a 1979 civil engineering graduate of Missouri S&T, was the commencement speaker at the ceremony, which honored former Missouri S&T students who graduated during 2020 or in spring 2021 but were unable to participate in a ceremony because of the COVID-19 pandemic. Summer 2021 graduates also participated.

“We are celebrating the beginning of the next chapter in your life. It begins with your education and your degree – your diploma,” Warmack said. “You worked for it. You earned it. And it was not free. But the best part is it is yours for the rest of your life, and the rest of your life commences today.”

Warmack cautioned the graduates not to take short cuts in their future careers.

“That may work to get you out of a jam in an exam, but for the long run always do your work with passion and a burning desire to get it right,” he said, encouraging the graduates to not cut corners, despite the pressures of budgeting and deadlines.

“You have a personal obligation to do science and engineering to get it right,” Warmack said. “That is what Missouri University of Science and Technology trained you to do. So, set your target to always, always apply the science, and do the technology, because we are all counting on you to do your best.”

Warmack concluded by sharing the importance of treating others with kindness and respect.

“You will always have the option, when dealing with people, to choose the high road,” he said. “You can be kind, you can be friendly. You can persevere in doing the right thing. You can perform with punctuality, self-restraint and grit. If you had the grit to graduate from Missouri S&T, I believe you have the grit to take the high road. Please, prove me right.”

Warmack earned a bachelor of science degree in civil engineering from Missouri S&T in 1979. Arriving on campus from Fort Smith, Arkansas, at age 17 after completing his junior year of high school, he finished his final high school requirements through a correspondence course and graduated from S&T at age 20, after 3 1/2 years of study. After graduation, Warmack joined his family real estate development business, where he worked for 36 years, and became engaged in public service in his home state of Arkansas.

Warmack’s father founded Warmack and Co. LLC in the 1930s. The company manufactured gas heaters in the winter and outdoor lawn furniture in the summer. In 1960, the company transitioned from manufacturing to real estate development with a focus on commercial development. Warmack developed computer-aided design software for the business. He also co-developed the structural engineering module for Graphisoft’s ArchiCad and was involved in designing Structural DeskTop, an application program interface for AutoCad.

For the past eight years, Warmack has focused his efforts on developing a national energy policy to close the nuclear fuel cycle through a program for recycling spent nuclear fuel. The science and technology needed to accomplish the policy originated with the Manhattan Project, and Warmack believes it is now ready for full-scale commercial deployment. Warmack has successfully shepherded energy legislation through the Arkansas General Assembly and is working with other states and national laboratories to implement the policy.

More information about Missouri S&T commencement is available at registrar.mst.edu/commencement.

On August 2, 2021. Posted in Alumni, Civil, Architectural and Environmental Engineering, College of Engineering and Computing, People