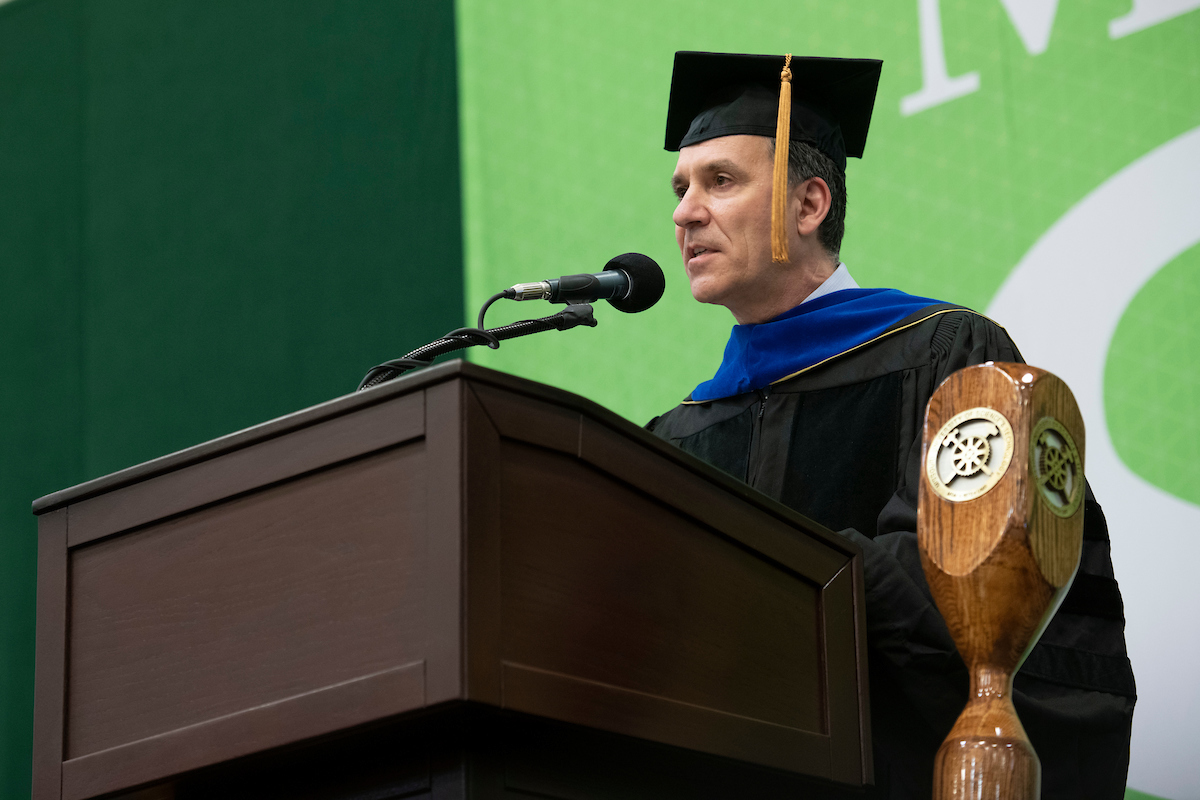 Dr. John C. Wagner, of Idaho Falls, Idaho, director of Idaho National Laboratory (INL) and president of Battelle Energy Alliance LLC, told graduates of Missouri S&T that now more than ever, the world is filled with unseen possibilities and opportunities.

Wagner, who earned a bachelor of science degree in nuclear engineering from Missouri S&T in 1992, spoke at four commencement ceremonies at Missouri S&T on Friday, May 14, and Saturday, May 15.

“We are living in a truly amazing time — a period of innovation and rapid transformation,” Wagner said.

“You have an opportunity to change the world. That may sound hyperbolic, but it is not. Things we cannot imagine today become reality tomorrow.”

Wagner spoke of his career in the nuclear energy field, noting that his belief in the power of clean energy to transform lives around the world has motivated him since he graduated.

“Just think about how innovative science and technology can help mankind make real progress toward eliminating energy poverty, providing life-changing access to electricity to the more than 1 billion people across the world currently living without,” he said. “And this represents only one of many areas in which, through science and technology innovation, you will create a better world.”

Wagner praised the graduates for showing grit and determination in overcoming obstacles and encouraged them to dream big, plan well, execute their plans and be receptive to change.

“You are mentally tough. You are prepared,” Wagner said. “Have the courage to be who you are. Trust your gut. Dare to make a difference. And understand that making mistakes is part of the process. That failure to achieve a particular objective need not be an end. It can also be a turning point.”

He concluded by encouraging the graduates to celebrate their achievements and enjoy the moment.

“The world stands before you, an open book with blank pages just waiting for someone to fill them in,” Wagner said. “But as I look at the class of 2021, I see people who are going to do more than just fill in pages. I see people who will write their own chapters.”

Wagner joined INL in 2016. He is responsible for managing and integrating a large, multipurpose laboratory whose mission focuses on nuclear energy, national and homeland security, and energy and environmental science and technology. He manages the U.S. Department of Energy national laboratory of approximately 5,200 scientists, engineers and support staff in multiple nuclear and nonnuclear experimental facilities, with an annual budget of over $1.3 billion. Prior to joining INL, Wagner worked for nearly 17 years at Oak Ridge National Laboratory, where he held several research and leadership roles in reactor and fuel cycle technologies.

Wagner is a Fellow of the American Nuclear Society and recipient of the 2013 E.O. Lawrence Award. He has authored or co-authored more than 170 refereed journal and conference articles, technical reports, and conference summaries. He earned master of science and Ph.D. degrees from Pennsylvania State University in 1994 and 1997, respectively.