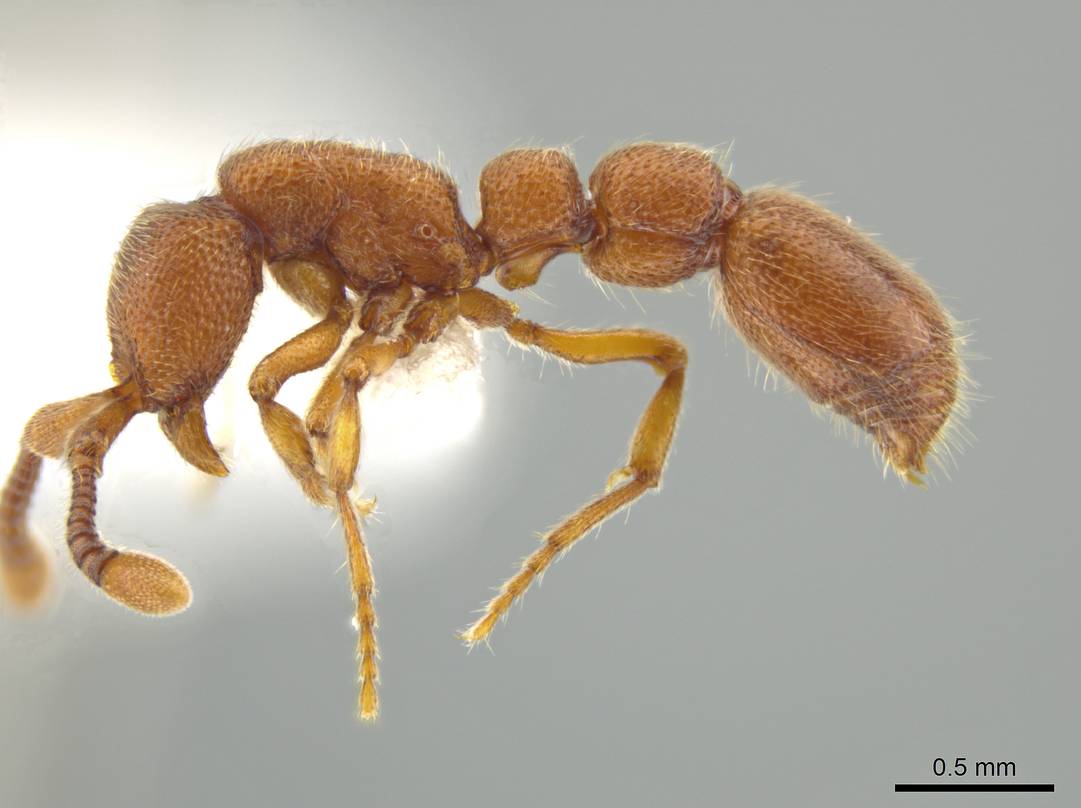 Until recently, Syscia sumnichti was just one of 10,000 to 30,000 nameless species of ants. Today, this inconspicuous little ant, native to Central America, has not only a name, but also a connection to Missouri S&T.

Syscia sumnichti made its debut in a research paper published this month by Dr. John Longino, a professor of biology at Utah, and Michael G. Branstetter, a researcher with the U.S. Department of Agriculture. Syscia sumnichti is one of over 30 new ant species named in the paper, which was published in the Entomological Society of America journal Insect Systematics and Diversity.

Earlier this year, the species was named Syscia sumnichti in recognition of work by Missouri S&T biologist Theo Sumnicht. Now an academic specialist responsible for managing Missouri S&T’s Ozark Research Field Station (ORFS) south of Rolla, Sumnicht began studying ants while an undergraduate student at the University of California-Davis. Later, as a Ph.D. student at the University of Utah, he helped define characteristics that set this species apart from other Syscia.

“It’s an incredible honor,” Sumnicht says of the designation, “but I’m also thrilled to see the project finally resolved.”

Sumnicht’s interest in ants blossomed during his undergraduate years at UC-Davis, where he majored in entomology, or the study of insects. There he volunteered in a laboratory overseen by Dr. Philip S. Ward, “a globally renowned ant taxonomist.” Sumnicht curated ant specimens from Papua New Guinea, which “were unlike any animals I’d ever seen, even on TV,” and the fascination drew him deeper into the study of ants, he says.

“Once I got that initial exposure I couldn’t pull myself away from ants,” Sumnicht says. “They’re just too fascinating.”

Sumnicht first encountered his namesake insect during a research expedition to Guatemala in 2009 – during his senior year – but did not realize it was new at the time. It was only after a master’s degree in biology at the University of Arkansas-Little Rock that Sumnicht began to investigate the genus Syscia while in the University of Utah’s doctoral program.

“Very little was known about them,” he says, “but every couple of years a single specimen would turn up in a museum collection somewhere. At the time I started there were three formally described species in North and South America, and I only had access to about 50 specimens at the University of Utah.

“I spent a year traveling to museums around the country and borrowing material from Central America. Combined with an influx of new material from recent expeditions to Honduras and Costa Rica, I then had amassed several hundred specimens,” Sumnicht says. “Looking at them all in one place, it became clear that what disparate museums had been identifying as two species was actually a complex of over 30 distinct species.”

But the species’ similar morphologies, or body shapes, made it “very difficult to suss out using morphology alone,” Sumnicht says. He helped extract DNA from the specimens, studied it and categorized the evolutionary characteristics of Syscia before withdrawing from the Ph.D. program.

Longino and Branstetter continued the work and published the list of new species, including Syscia sumnichti, in their recent journal article.

A ‘rare and inconspicuous’ creature

What makes Syscia sumnichti so special? It is uncommon, even in its native habitat. It also has never been seen alive. All specimens Sumnicht and others studied were gathered from leaf litter samplings and arrived at the lab “dead in a cup of ethanol.”

This “rare and inconspicuous” creature, “barely the size of a grain of rice,” is also found only in the soil of high mountain slopes in Guatemala, Honduras and Nicaragua, says Sumnicht.

Even though no member of the species has ever been captured alive, the ant’s biology and behavior “can be inferred from other members of the genus,” Sumnicht says. For example, all Syscia workersare blind, they tend to have small colony sizes “and they’re nomadic, subterranean raiders of other ground-nesting insects.”

How nomadic? Sumnicht hasn’t encountered any samples of the genus at the S&T field station, located about 20 miles southwest of Rolla. But Sumnicht is on the lookout.

“I do periodically sample leaf little from the surrounding forest,” he says. “The northernmost records of the genus are in the Ozarks of Arkansas, so it’s quite possible they could be found locally as well. I won’t find my species, but if any others turn up, it would be a new state record for the genus.”

Even if these ants never make it to this section of the Ozarks, a vast array of fauna and flora remain undiscovered here and elsewhere.

“There is an immense amount of biodiversity that is left unknown to humanity, and it is disappearing at a faster rate than we are even made aware of it,” Sumnicht says. “In addition to conservation projects, there is a race just to chronicle what lives on the planet before it’s gone.”