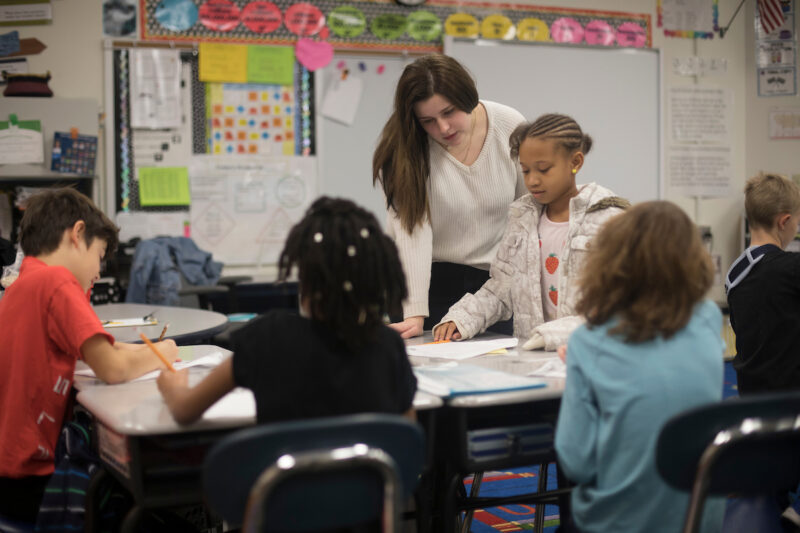 Missouri S&T plans to help address a shortage of K-12 teachers in STEM fields with a proposed new bachelor of science in education degree. Photo taken before COVID-19 by Sam O’Keefe/Missouri S&T

The University of Missouri Board of Curators approved Missouri S&T’s proposals for a new master of science in water science and engineering and a bachelor of science in education during the board meeting today (Thursday, Feb. 4). The degree proposals will now go to the Missouri Coordinating Board for Higher Education for approval.

S&T’s proposed water science and engineering master’s degree will combine the expertise of multiple departments to address society’s challenges of water sustainability and water security. S&T interim Provost Stephen Roberts says there is strong state and national demand for graduates in water science and engineering. In his report to the curators, he pointed to 45,000 openings nationally and almost 600 in Missouri in the last year. Roberts says Missouri will need 21.1% more natural science managers and water resource specialists over the next decade.

“Our graduates will be in a strong position to fill growth in any of these sectors,” says Roberts. “By relying on existing courses with additional capacities for enrollments, we are able to provide a unique but very low-cost program with a fully online option.”

Missouri S&T has been training teachers for more than a decade with a heavy emphasis on STEM. The university’s proposed bachelor of science in education degree will allow S&T to expand its teacher education and certification department to prepare more teachers, especially for those in Missouri’s south-central region. The state faces shortages of K-12 teachers in STEM content areas and those serving in rural areas, Roberts says.

“S&T is uniquely poised to attract high-quality STEM teachers and supply them to the rural schools in the region,” says Roberts. Roberts says that 15 of the 19 S&T student teachers this spring chose to be placed in a rural school district.

The proposed curriculum for the bachelor of science in education degree requires 121 credit hours in most cases and is designed to integrate courses from nearby community colleges. The Missouri Department of Elementary and Secondary Education (DESE) has approved a list of S&T’s courses for the emphasis areas. All of the areas are on DESE’s teacher shortage lists, including elementary education (No. 2 on the list), middle school science (No. 7), middle school math (No. 8), middle school language arts (No. 9) and middle school social studies (No. 16).

According to the DESE First Year Teacher Survey, 89% of principals reported that S&T graduates’ preparation was good or very good. S&T students also have a high pass rate for the required Missouri Content exam (MoCA). In July 2020, 10 S&T students took the MoCA and nine passed on their first attempt.