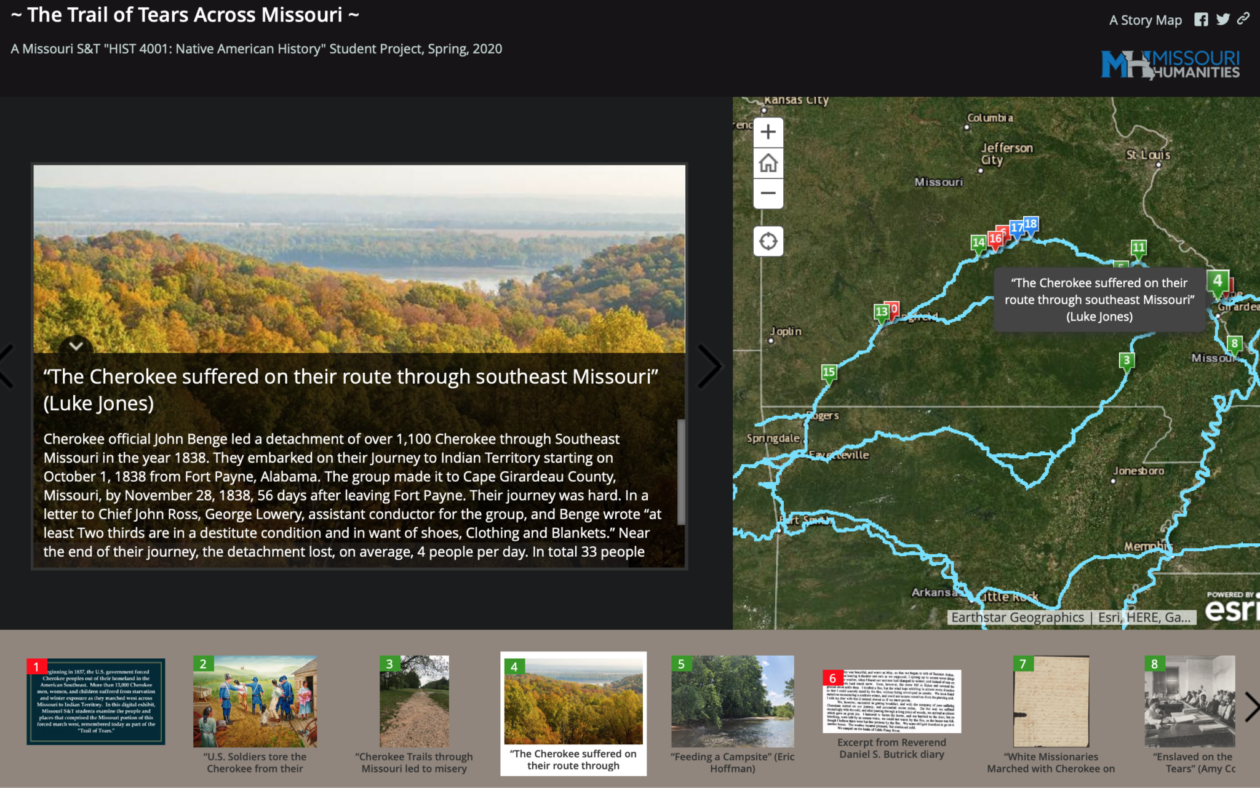 Missouri University of Science and Technology students created a digital exhibit to tell the story of how thousands of Native Americans travelled through Missouri nearly 200 years ago on a forced march westward that became known as the “Trail of Tears.”

Students in Dr. Justin Pope’s Native American History course at Missouri S&T developed the story map last spring as a research project that was supported through a grant from the Missouri Humanities Council (MHC). The MHC grant paid for technology and touchscreens that exhibit the story map in Missouri S&T’s new Collaboratory. The agency also created a website to host the digital exhibit.

Pope, an assistant professor of history at Missouri S&T, says students in his course “examined the people and places that comprised the Missouri portion of this forced march west,” and through their research, reconstructed the journey with this digital exhibit.

“Students conducted original research into the people, places and events that shaped the experience” of the Cherokee people as they journeyed through southern Missouri, Pope says. “MHC Archaeologist Erin Whitson advised our students and matched their research with her agency’s ongoing research into the Missouri Trail of Tears. The Missouri Humanities Council has been a great partner.”

The forced march, now known as the Trail of Tears, began in 1837, when the federal government forced members of the Cherokee tribe from their homeland in the American southeast. Over 13,000 Cherokee men, women and children suffered from starvation and winter exposure as they marched west across Missouri to Indian Territory, which was located in present-day Oklahoma.

The exhibit consists of an interactive map of Missouri with multimedia content about the journey. The content includes photographs, illustrations, diary entries and other source material about the Trail of Tears experience in Missouri.

In addition to its online presence, the exhibit will be on display in Missouri S&T’s Collaboratory, a research and communication hub where students and faculty explore ways to use technology to present and discuss complex issues in the humanities.

Missouri S&T students involved in the project are:

On February 23, 2021. Posted in CASB Research, College of Arts, Sciences, and Business, Department of History and Political Science, News