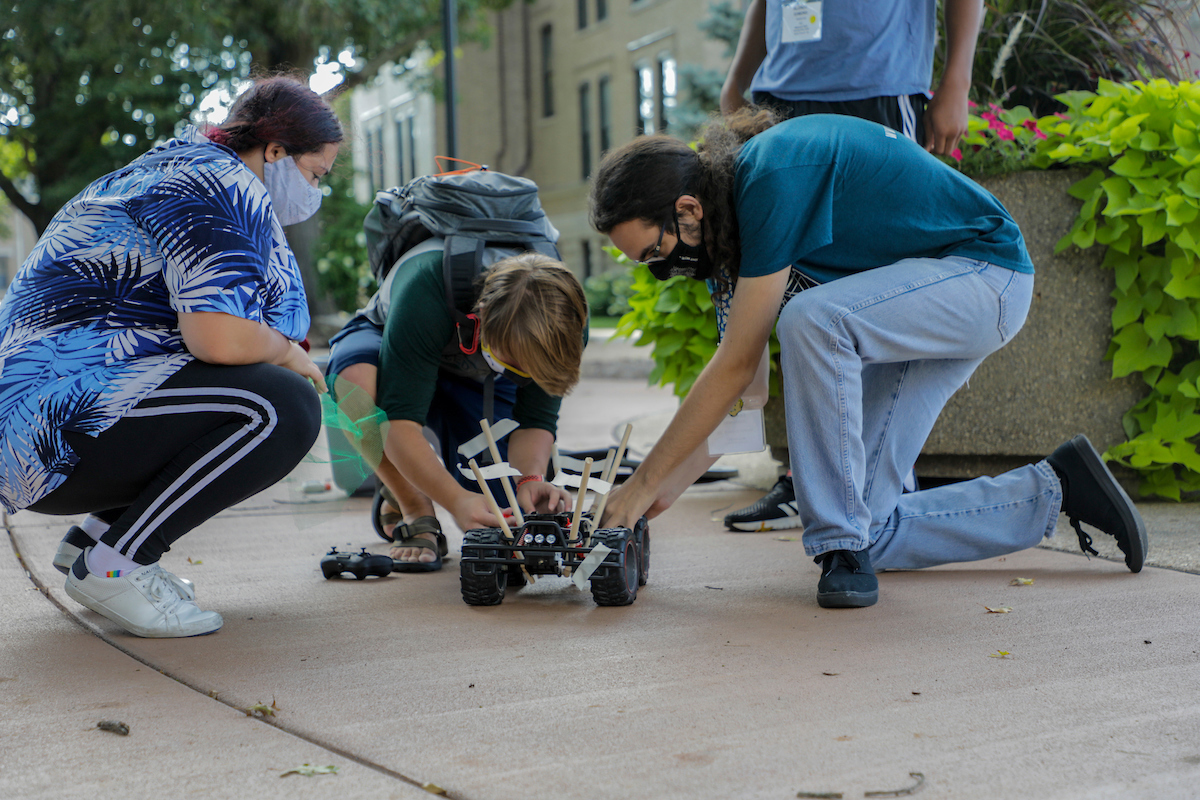 Students modify a remote controlled vehicle on Aug. 18 for the Project X competition. Throughout Opening Week 2020, new students worked in small groups to complete activities designed to introduce freshmen to new friends, the campus culture and opportunities for future involvement.

This week marks the first week of classes for Missouri S&T’s incoming freshmen. We asked a few of our newest students what was on their mind as they entered college. Here’s what they had to say:

What are you most looking forward to as an incoming freshman?

“I am looking forward to applying the skills I learn in a classroom setting and being able to use those in my day-to-day life. I am also looking forward to meeting new people from all over the country.” – Braden Dement, Ashland, Missouri

“Trying to do my best, and hopefully find a career and friends!” – Remington Breuer, Lathrop, Missouri

“I am looking forward to getting involved in a sorority, a design team, and potentially being a research assistant to a professor on campus.” – Abby Dillon, Fenton, Missouri

Why did you choose Missouri S&T?

“Because it has a great nuclear engineering program.” – Corban Preston, Kearney, Nebraska

“In seventh grade I heard about a new program starting at my school called Project Lead The Way that was about engineering. I thought that sounded awesome (and I really wanted to build robots), so I signed up for the class. My eighth grade year I heard that the teacher had to come to S&T to get certified to teach the class and I thought that was cool. As I followed the pathway and started learning more about engineering, I decided more and more that S&T would be a good fit.” – Connor Pittman, Joplin, Missouri

“I chose S&T because I felt that this school has the best resources to help their students succeed. Whether it’s helpful professors or the student resource center, I feel that there’s always somewhere I can go for help.” – Riley Spering, Springfield, Missouri

“They have a really good financial aid office and they offer some of the best education for STEM students.” – Alexandra Custer, St. Louis, Missouri

“I chose Missouri S&T because I believe this college will give me a solid foundation in a scientific career.” – Rachel Adcock, Kearney, Missouri

“I chose Missouri S&T for its longtime reputation of a highly rigorous but very rewarding university to set the stage for a successful future.” – Chace Schnaath, Hillsboro, Missouri

What student organizations are you planning to join and why?

“I plan on joining E-Car as it shares my goals of sustainability in racing.” – Cameron Haines, Kansas City, Missouri

“I am planning to join National Society of Black Engineers. During my junior year of high school, I visited the school for a day and had the opportunity to meet them. They encouraged me to start a Black Student Union at my very own high school, so from that point I knew this was the school I wanted to attend and this is the organization I wanted to join.” – Jana Shivers, Saint Peters, Missouri

“I plan on joining either the rocket or Mars rover design team because they will both relate to my field of study and remind me of my robotics team back at home. I also plan on joining the Student Council because it is a great way to be involved and know what is happening around campus.” – Mitchell Blanchard, De Soto, Missouri

“I plan on joining the concrete canoe team because it interests me, the Newman Catholic Center because I am a Catholic, and maybe Greek life later down the line.” – Wade Hite, Springfield, Missouri

“I would like to join choir, swing dance and cross country. I think it’s important to take some time to have some clubs that not only make you more well-rounded but also relieve some stress.” – Molly Prescott, St. Louis, Missouri

Which degree do you hope to pursue and why?

“Civil engineering. The idea of designing and building giant structures that make a mark and help the people of a community is amazing.” – Ryan Highfill, Highlandville, Missouri

“Chemistry. I hope to graduate with a master’s degree and go on to work for a company that manufactures pharmaceuticals.” – Abby Dillon, Fenton, Missouri

“Mechanical engineering has always been a goal in my life ever since I was young. I loved designing and building robots for my robotics teams throughout middle and high school, and I aim to continue to develop more complex robots with the student design teams at S&T.” – Matt Stehlin, Greensboro, North Carolina

“I hope to pursue aerospace engineering because the topics involved in it are some of my favorite topics to talk and think about. Also, who doesn’t like a little bit of space in their life?” – Mitchell Blanchard, De Soto, Missouri

“Electrical engineering. I have always been a fan of things electrical and electronics and it always fascinates me.” – Gabe Schoenberger, Fenton, Missouri

“I’m hoping to obtain a degree in computer science because I’m not passionate about a lot of things but I am when it comes to coding.” – Jana Shivers, Saint Peters, Missouri

“I hope to achieve a biology degree so I can follow the path my parents have made to help people as a doctor.” – Zachary Roberts, Saint Charles, Missouri

“Computer engineering, because I have grown up in the technology age and it has shaped my life, and I would like to contribute to the field that has given me so much.” – Jacob Ott, Cape Girardeau, Missouri