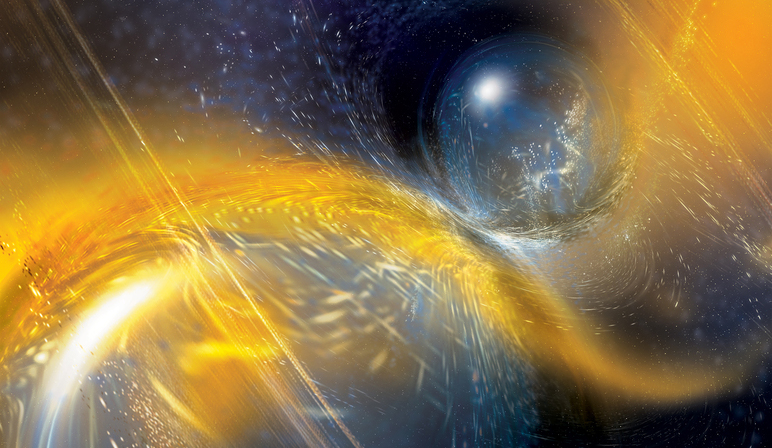 Missouri S&T students and researchers contribute to the endeavor

A new study confirms that the Laser Interferometer Gravitational-wave Observatory (LIGO) near Livingston, Louisiana observed a neutron star collision on April 25, 2019. The observation is only the second time researchers detected such an event in gravitational waves.

Neutron stars are the remnants of dying stars that undergo catastrophic explosions as they collapse at the end of their lives. When two neutron stars spiral together, they undergo a violent merger that sends gravitational shudders through space and time.

“This observation is very important because it confirms LIGO and Virgo’s potential in detecting mergers of neutron star binary systems and provides new information about the nature of these systems,” says Dr. Marco Cavaglia, Missouri University of Science and Technology professor of physics, principal investigator of the Missouri S&T LIGO group and co-chair of the LIGO Scientific Collaboration Burst Sources Working Group. “This detection is especially interesting because the combined mass of this binary system is much higher than what was expected.”

Missouri S&T is the state’s only institutional member of the LIGO Scientific Collaboration (LSC). With National Science Foundation (NSF) funding, Missouri S&T students and researchers contribute to the LIGO endeavor in the areas of data analysis, detection and astrophysical interpretation of unmodelled gravitational-wave signals, detector science and calibration.

“This observation highlights the power of gravitational waves as agents of scientific discovery and promises a great future for multi-messenger astrophysics,” says Thomas Vojta, Curators’ Distinguished Professor of physics and chair of Missouri S&T’s physics department. Vojta notes that multi-messenger astronomy occurs when different types of signals are witnessed simultaneously, such as those based on gravitational waves and light.

An international team comprised of the LSC and the Virgo Collaboration authored the study and submitted it to The Astrophysical Journal Letters. The team presented the results at a press briefing on January 6, 2020, at the 235th meeting of the American Astronomical Society in Honolulu, Hawaii.

The first such observation in August 2017 made history as the first time that both gravitational waves and light were detected from the same cosmic event. The April 25 merger did not result in any light detection. But through analysis of the gravitational-wave data, researchers have learned that the collision produced an object with an unusually high mass.

“The data show that the colliding stars are most likely neutron stars,” says Ryan Quitzow-James, a postdoctoral researcher in the Missouri S&T LIGO group. “However, as a binary neutron star system, the total mass is much higher than any of the other known galactic neutron star binary systems. This could have interesting implications for how the pair originally formed.”

About the gravitational-wave observatories

LIGO is funded by the NSF and operated by the California Institute of Technology and the Massachusetts Institute of Technology, which conceived of LIGO and lead the project. Financial support for the Advanced LIGO project was led by the NSF with Germany’s Max Planck Society, the United Kingdom’s Science and Technology Facilities Council, and the Australian Research Council Centre of Excellence for Gravitational Wave Discovery making significant commitments and contributions to the project. Approximately 1,300 scientists from around the world participate in the effort through the LIGO Scientific Collaboration, which includes the GEO Collaboration. A list of additional partners is available at https://my.ligo.org/census.php.

The Virgo Collaboration is currently composed of approximately 520 members from 99 institutes in 11 different countries including Belgium, France, Germany, Hungary, Italy, the Netherlands, Poland and Spain. The European Gravitational Observatory (EGO) hosts the Virgo detector near Pisa, Italy, and is funded by the French National Center for Scientific Research, the National Institute for Nuclear Physics in Rome, and the National Institute for Subatomic Physics in Amsterdam. A list of the Virgo Collaboration groups can be found at http://public.virgo-gw.eu/the-virgo-collaboration/. More information is available on the Virgo website at http://www.virgo-gw.eu.