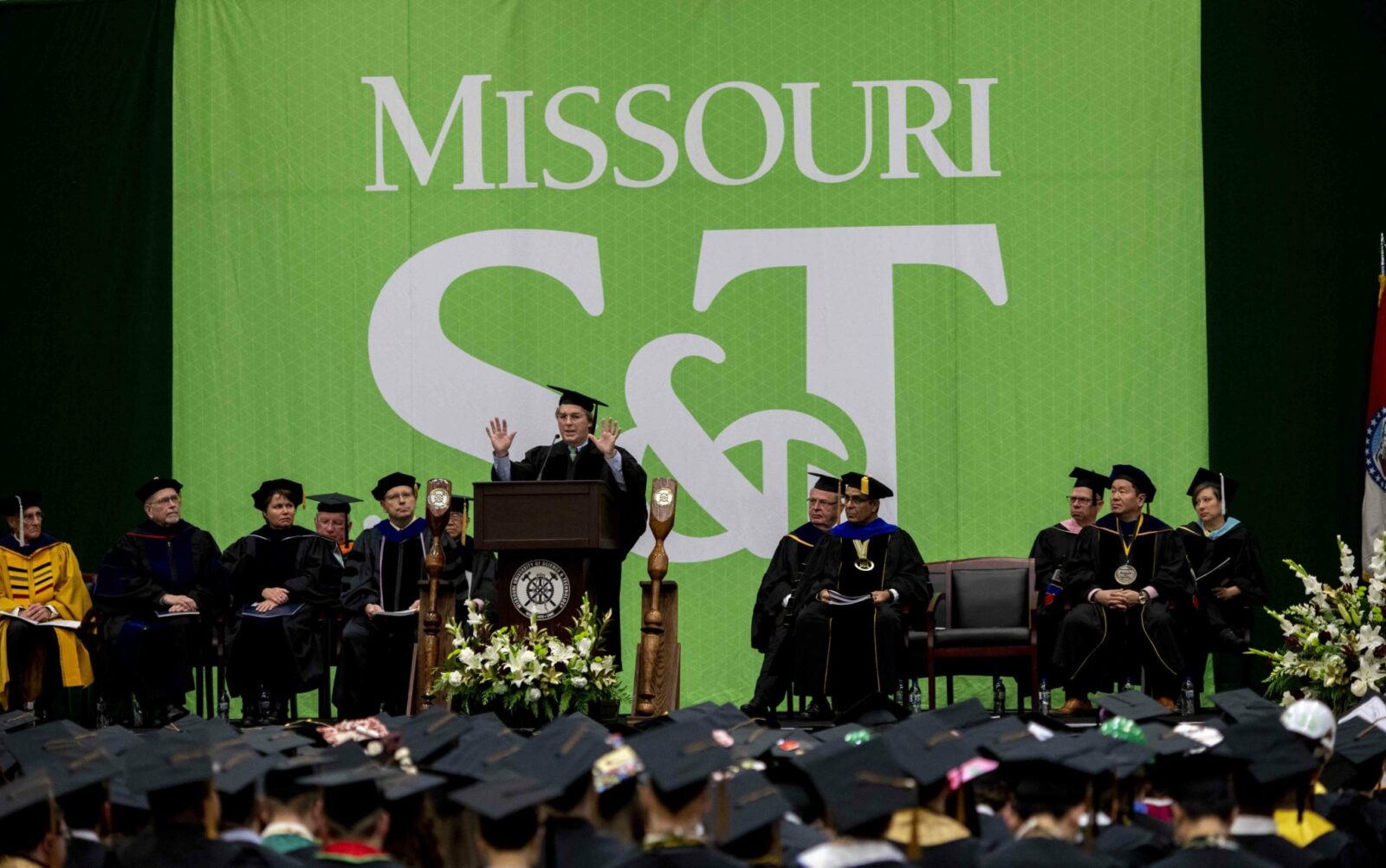 At two commencement ceremonies on Saturday, Dec. 14, R. Tim Bradley, retired president of Kinder Morgan CO2 Co., from Austin, Texas, spoke to graduates of Missouri University of Science and Technology about what he learned during his successful career in the oil and gas industry. Bradley earned a bachelor of science degree in petroleum engineering from Missouri S&T in 1977.

Bradley praised S&T alumni that he has hired and encouraged the graduating class to continue their success.

“Every person my company hired from S&T was shovel ready and did a superb job,” said Bradley. “S&T students and alumni never cease to impress me. Not only are they outstanding engineers and scientists, but they are also very accomplished. This is quite a legacy, and you have earned it. And now it’s up to you to continue building it.”

Bradley told the students, friends and families at the ceremonies about his time as a student at Missouri S&T. In 1976, Bradley took an enhanced oil recovery survey course taught by Dr. Leonard Koederitz, Curators’ Distinguished Teaching Professor emeritus of petroleum engineering, to learn about C02 injection techniques. He says Koederitz explained how CO2 mixed with crude oils in the ground and said that experts predicted the technique would increase oil production by 40%.

“Dr. Koederitz said this was the most economical technique to recover oil if an abundant supply of CO2 was nearby,” said Bradley. “I was sold. This was what I wanted to specialize in, and I was thinking about that very plan, sitting right over there nearly 43 years ago.”

Bradley found success in his career with Shell Oil in west Texas and was promoted several times. But he said his career stalled when he took a job outside his expertise and struggled in the position. Shell assigned Bradley to a new job as manager of CO2 marketing.

“It dawned on me that I wasn’t doing engineering or operations anymore,” said Bradley. “Now, I was designing business transactions with other companies. I was learning the business side of the industry, and I discovered that I really enjoyed it.”

In his new role, Bradley’s operation grew to include engineering and operations again, and he implemented a new business model. Shell decided to sell his part of the business to Kinder Morgan, and that’s when he pitched the idea of buying a faltering CO2 project.

“Using CO2 injection, we increased production to over 55,000 barrels per day, making us the second-largest oil producer in Texas – a title we held for nearly 10 years,” said Bradley.

Over the next 13 years, Kinder Morgan C02 grew into the largest producer, transporter and marketer of carbon dioxide in the United States, the second-largest oil producer in Texas, and the largest and most profitable division of Kinder Morgan.

Bradley left the graduates with several lessons. He encouraged them to never stop learning and said it was now up to them to be prepared for the future by learning everything they can about their industries.

Bradley also talked about how failure can be an important turning point.

“My experience has taught me that failure can open doors and many times can be a blessing,” said Bradley. “The important thing is how you respond when you experience your moment of truth. Your success will not be measured just by your position, wealth or accomplishments.”

A member of the Board of Trustees for both Missouri S&T and the Magellan International School in Austin, Bradley was inducted into S&T’s Academy of Mines and Metallurgy in April 2013 and was honored with an Award of Professional Distinction in May 2014. He and his wife, Kay, are members of the Missouri S&T Order of the Golden Shillelagh.

Bradley retired in early 2013, and he and his wife moved to Austin, Texas. They have seven children and eight grandchildren, most of whom live in Austin, too. Tim is an avid woodworker who enjoys making heirloom furniture for their home and for their children. In 2014, Tim and Kay established the R. Tim and Kay Bradley Petroleum Engineering Graduate Student Fellowship Endowment.