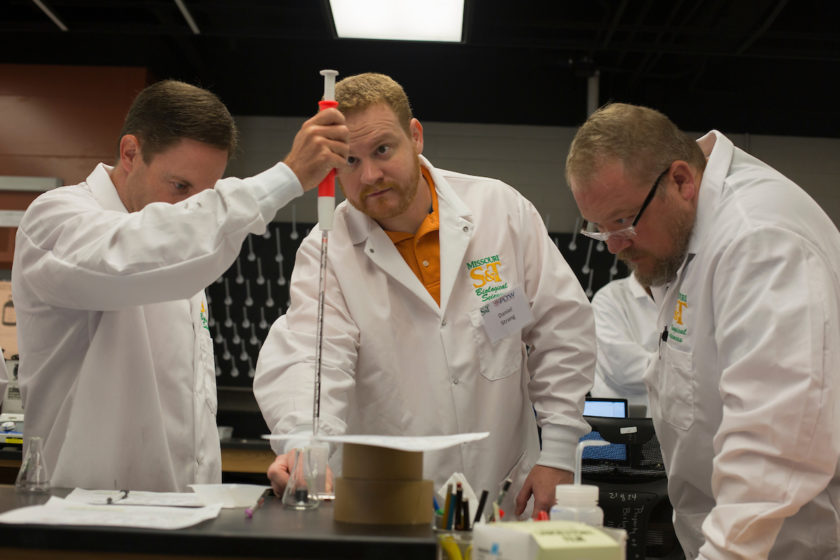 Project Lead The Way (PLTW), a national nonprofit organization that aims to generate interest in science and engineering among pre-college students, is expanding into new school districts in 10 south-central Missouri counties. The state’s PLTW effort is coordinated through Missouri S&T, which is providing state-funded grants to the districts.

David Hosick, senior program director of PLTW at Missouri S&T, has been traveling the region distributing grants to the school districts. The Missouri General Assembly approved $250,000 in state funding for the effort to expand access to PLTW in 41 school districts in 10 counties. Known collectively as SOAR, or the Southern Alliance for Rural Development, the region encompasses Carter, Douglas, Howell, Oregon, Ozark, Reynolds, Texas, Wright and Wayne counties.

“Jobs in the 21st century will be much more complex and technical than anything we’ve seen in the past,” says State Sen. Mike Cunningham, who sponsored the legislation. “If we are going to attract employers and keep good jobs in our area, it’s vital that we prepare our children to compete in today’s high-tech workplace. Not every student will go to college, but all young people can benefit from a foundation in the STEM fields.

“The goal is not just to expose students to high-tech gadgets, but to prepare them to become an effective member of the workforce,” Cunningham adds. “Students learn communications and teamwork skills, at the same time they are exposed to the latest technology.”

With the addition of these districts, PLTW now serves 656 of Missouri’s public and private school districts and is found in 80 of the 114 counties in Missouri.

“We are grateful to the State Legislature for supporting this expansion of Project Lead The Way to equip today’s Missouri students with the skills they will need for the jobs of the future,” Hosick says. “I’m especially grateful to the support of State Sen. Mike Cunningham, who sponsored the legislation for this important outreach to some of our most at-risk communities.

“We believe this support is the start of transforming our current and future generation of students with current skills needed towards becoming impactful employees in whatever interests they may have. The overarching goal of this effort is to increase the ability of the region to attract new jobs and new investment by improving the educational aptitude and achievement of students, and the competitive position of the school district,” Hosick adds.

Missouri S&T is one of 17 training partners across the nation to equip teachers to incorporate science- and technology-based lessons into their classrooms. S&T provides the hands-on training in Lee’s Summit, Missouri, a suburb southeast of Kansas City.

PLTW is a nonprofit organization that provides hands-on science, technology, engineering and mathematics (STEM) curriculum for students pre-kindergarten through high school through career pathways in computer science, engineering and biomedical science. Missouri S&T has been the statewide PLTW affiliate for Missouri since the national program began in 1997 and has trained thousands of teachers through the program since that time.

PLTW and Missouri S&T take a similar approach to education, and that makes S&T a good partner for the national program, Hosick says.

“Missouri S&T’s model of learning through doing is very similar to the PLTW model of successfully engaging students in relevant ways,” he says. “We are excited to partner with PLTW to provide teachers with an exceptional learning experience.”

To receive the grants, schools districts must apply for the funding. So far, 17 of 41 eligible school districts have received funding. They are: