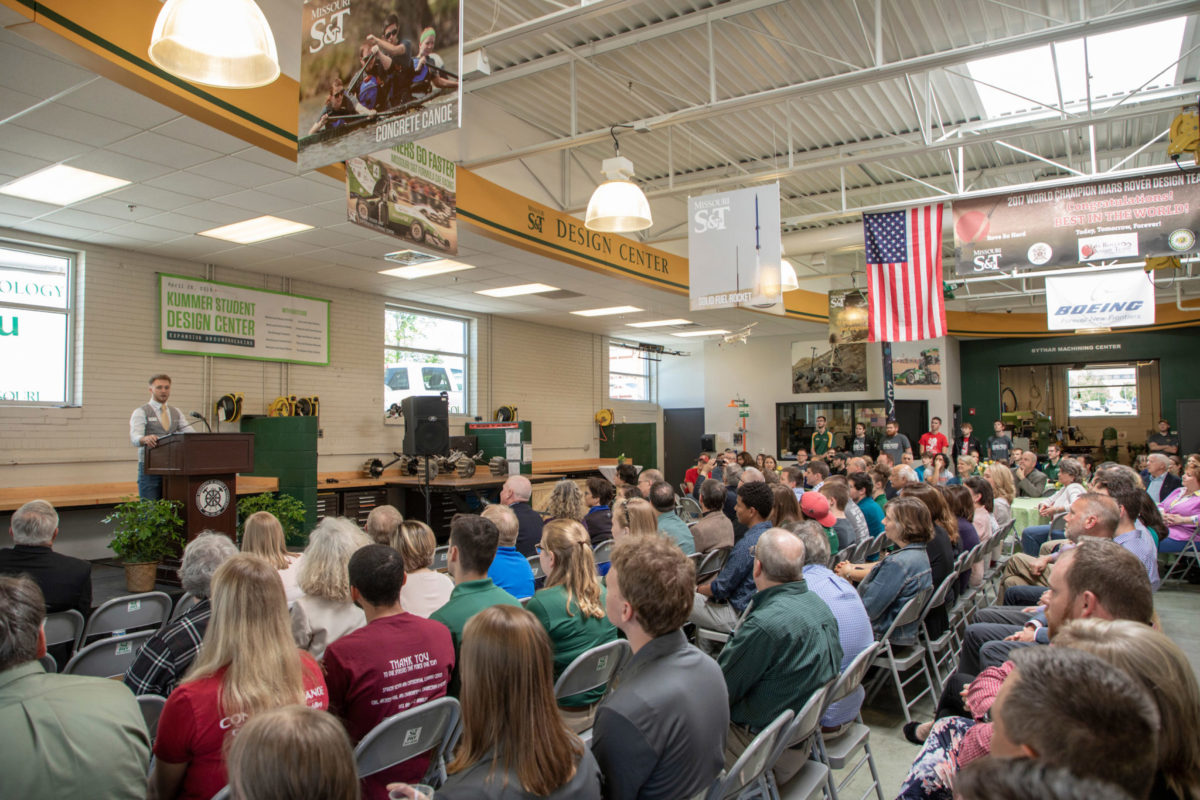 Private donations funded an expansion of the Kummer Student Design Center, where donors gathered in April to break ground on the project. Photo by Tom Wagner/Missouri S&T ©2019 Missouri S&T

Missouri S&T has surpassed last year’s milestone as the second-largest fundraising year in university history with another successful year for giving. During the fiscal year that ended June 30, Missouri S&T donors contributed $24.3 million in charitable gifts and pledges — a $1.7 million increase over last year’s benchmark of $22.6 million. The university also received nearly $20.2 million in private grants, which brings total external funding for the 2019 fiscal year to $44.5 million.

“This growth is a testament to many, but especially to the alumni who continue to prove that Miner pride is a powerhouse,” says Vice Chancellor for University Advancement Joan Nesbitt. “Giving of this magnitude is a resounding vote of confidence in the university, but most of all in our students. Miners are giving back to Miners, just as they have for nearly 150 years. This commitment is building a better future, not only for those who hold S&T degrees but also for people worldwide who are impacted by the expertise and service of our graduates, our faculty and our industry partners.”

Missouri S&T has been strengthened by significant acceleration in charitable giving, with an increase of 7% over last year’s total, 24% over two years ago and 129% over three years ago. The university’s largest fundraising year to date was 2007, when charitable gifts totaled more than $25.4 million.

Fundraising highlights for the 2019 fiscal year include a $5 million planned gift from alumni John and Kristie Gibson in support of athletics, a $3.8 million bequest from alumnus Morton Deutch in support of scholarships; a $1 million gift from alumna and trustee Dr. Joan Woodard and her husband, Dr. James Woodard Jr., to establish the Woodard Associate Professorship for Excellence in Electrical and Computer Engineering; and a $550,000 gift from alumnus Robert M. Williams Jr., president and CEO of St. Louis-based Williams Patent Crusher and Pulverizer Co., to fund a 300-seat lecture hall in the university’s new Classroom Learning Center.

Scholarship support for S&T students also increased thanks to 306 donors who contributed more than $6.5 million to the Miner Match, a scholarship matching program launched in response to the University of Missouri System’s Missouri Promise and Opportunity initiative. The focus of the S&T and UM System scholarship matching program is twofold: to recruit top students, and to help current students with financial need complete their degrees and graduate.

Over the past four years, the significant investment made by donors has laid a strong foundation for the university’s next comprehensive fundraising campaign, which will be announced during Missouri S&T’s 150th anniversary celebration in 2020-2021.

“The donors who give back to Missouri S&T ignite extraordinary possibilities in the lives of our students, in the potential for solution-inspired research and in the leadership essential for solving critical global challenges,” says Missouri S&T Chancellor Mohammad Dehghani. “This commitment is the cornerstone that drives excellence and defines Miner pride.”

On August 1, 2019. Posted in Missouri University of Science and Technology, News, University News