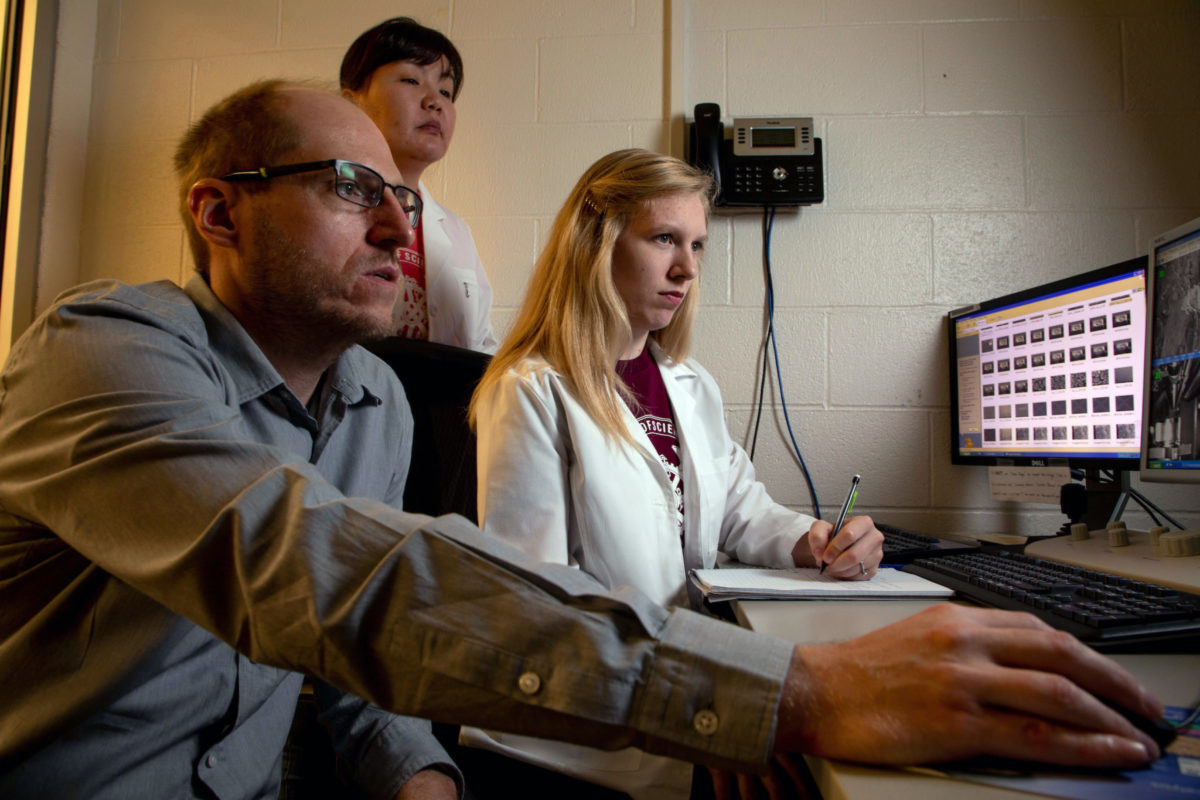 Approximately 2.4 billion years ago, the Great Oxidation Event, which dramatically increased the oxygen content in Earth’s atmosphere, paved the way for the rise of all lifeforms that use oxygen to break down nutrients for energy. While scientists agree about when the event happened, they are less certain about exactly how it occurred.

Now, however, researchers at Missouri S&T say they’ve discovered a possible trigger for the Great Oxidation Event and the arrival of plants and animals on Earth.

An assistant professor of geosciences and geological and petroleum engineering at Missouri S&T, Dr. Marek Locmelis’ geological research investigates the processes that occur in Earth’s interior. Part of his research examines if and how oxygen bound in minerals and magmas in the interiors of planets can affect the composition of oceans and atmospheres and contribute to whether a planet is habitable.

“Without the Great Oxidation Event, there would be no plant and animal life on Earth or at least no life on Earth as we know it – including us,” says Locmelis. “We provided really solid evidence that Archean mantle oxidation contributed to it, which was something that was ruled out for the past 20 or 30 years.”

In a paper for the August issue of American Mineralogist, Locmelis describes how he used a technique known as laser ablation inductively coupled plasma mass spectrometry (LA-ICP-MS) analysis to study minerals that contain clues on how Earth’s interior changed over time. This technique enables much more sensitive isotopic and elemental analysis of solid samples than earlier methods.

Locmelis studied samples of the mineral olivine in igneous rocks called komatiites. These rocks were derived from Earth’s mantle during the Archean Eon – a geologic time period of Earth’s history from 4 billion to 2.5 billion years ago. In collaboration with researchers at the University of Maryland, The University of Western Australia and Royal Holloway, University of London, Locmelis gathered samples of komatiites from the Kaapvaal and Zimbabwe Cratons in southern Africa, the Yilgarn Craton in Australia, and the Superior Craton in Canada. A craton is an old, stable part of the Earth’s topmost layers – the crust and upper mantle. The samples range from 2.7 billion to 3.5 billion years old.

“Because they’re so old, and they came from deep in the Earth, they allow us a unique window into what the interior of our planet looked like more than 2.7 billion years ago,” says Locmelis.

The researchers compared the trace element chemistry of olivine from komatiites that are 3.5 billion to 3.3 billion years old to ones that formed more recently – about 2.7 billion years ago. Locmelis focused on redox-sensitive element rations, such as vanadium to scandium, which can be used to investigate redox conditions of magmas. Redox — or reduction-oxidation reaction – is a type of chemical reaction in which the oxidation states of atoms are changed. Reduction and oxidation reactions play an important part in the evolution of planetary atmospheres. Increased levels of oxygen – an oxidizing atmosphere – may have enabled the evolution of aerobic respiration, allowing today’s plant and animal life to evolve and thrive.

Locmelis’ research team found that, based on trace element ratios captured by olivine, it appears that Earth’s mantle gradually became more oxidized between 3.5 billion and 2.7 billion years ago. This oxidation, in turn, possibly triggered the Great Oxidation Event, which scientists agree occurred some 2.4 billion years ago.

Locmelis says previous studies from the 1990s and early 2000s largely dismissed the Archean Eon mantle oxidation because they used different analytical techniques. Researchers used to crush and analyze whole rocks instead of being able to isolate minerals, such as olivine, and analyze them via modern techniques, such as the one used in this study.

“Take eating a sandwich. You take a bite and just want to taste a pickle, but sometimes the pickle is so small that you’re overwhelmed by all the other flavors,” says Locmelis. “That’s the difference between whole rock studies and mineral studies. When you analyze minerals directly, you circumvent all the problems associated with bulk analysis, which really are just a mix of different flavors or geological processes. If you analyze minerals that crystallized early from the magma, you really have much more robust information, especially with all the modern techniques we have available today.”

Locmelis says his study suggests that Archean mantle oxidation may have contributed to, or even triggered, the oxidation of the atmosphere, which led to the lifeforms on Earth today. He notes that a recent study by Dr. Robert Nicklas from the University of Maryland, submitted at the same time as his, yielded similar results, but used a different analytical approach.

“If two studies come to the same conclusion, independently and with different techniques, it suggests that we are really onto something, and that we have to rethink our understanding of the redox evolution of our planet,” says Locmelis.

Understanding how Earth evolved also provides insight into the evolution of other planets and exoplanets and their atmospheres, according to Locmelis. He says that probably not all planets in our galaxy have undergone mantle oxidation and therefore have atmospheres that are more reduced and toxic. Understanding the geological past of extraterrestrial bodies can help scientists understand how life forms on other planets in our solar system and beyond, he says. Locmelis says S&T researchers are now investigating meteorites from other bodies in the solar system that represent different stages of planetary evolution to gain further insight into the evolution of these systems.