Armed with more than $5.1 million in federal funds, researchers at Missouri S&T and Phelps Health are helping the U.S. Army tackle the persistent problem of traumatic brain injury (TBI) among soldiers and recruits.

Funded by the U.S. Army Research Laboratory through the Leonard Wood Institute (LWI), the Army’s research arm at the nearby Fort Leonard Wood post, Missouri S&T scientists and engineers will take a variety of approaches to address the issue. They hope their efforts will help the Army detect TBIs sooner and more accurately, prevent TBIs during basic training, and help the military better understand the causes of brain trauma. Their research could lead to new TBI detection tools for use on the battlefield or in training.

Missouri S&T research projects include a urine test to quickly determine whether a soldier might have a TBI, a sensor-embedded helmet to transmit brain activity to observers, development of a helmet liner to protect the brain against blast waves, and development of antioxidants that could prevent or treat brain trauma.

In all, Missouri S&T has received funding for seven different research projects related to TBI detection and prevention.

“Thousands of recruits come to Fort Leonard Wood each year for basic training, and hundreds of those recruits experience TBI during their training,” says Dr. Costas Tsatsoulis, Missouri S&T vice chancellor for research and dean of graduate studies. “Preventing TBI is a priority for the Army, and we have the breadth of research expertise to help.

“In addition to our proximity to Fort Leonard Wood, we have a long-standing relationship with the fort and great familiarity with the community there,” Tsatsoulis says. “We’re grateful for the Army’s support of this truly multidisciplinary approach to help our military address one of its most arduous research challenges.” 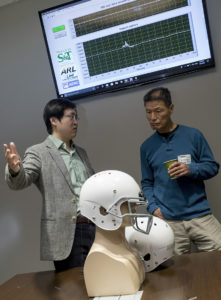 Hundreds of thousands of U.S. soldiers suffer from TBI, according to a 2018 report from the Center for a New American Security (CNAS), a Washington, D.C., think tank. “Emerging evidence suggests that servicemembers may be exposed to high levels of blast overpressure (the pressure wave that comes from explosions) when firing heavy weapons,” write Lauren Fish and Paul Scharre in the CNAS report.

Left undiagnosed or untreated, TBI can result in later complications, including dementia, according to a 2018 study published in JAMA Neurology. Moreover, according to the CNAS, U.S. Department of Defense studies show that some soldiers experience cognitive deficits, including delayed verbal memory and visual-spatial memory, after firing heavy weapons.

The Army trains about 85,000 soldiers each year at Fort Leonard Wood, says Dr. Don James, chair of the AENC board of directors and Phelps Health’s senior vice president of research and government affairs.

Of those, some 600 to 800 experience TBI, according to the Army’s estimates, with significant numbers going unreported. Fully 85 percent of all TBIs experienced by troops occur during basic training, he says.

“Missouri S&T is taking innovative approaches to addressing TBI, and we’re very pleased that S&T is part of this consortium,” James says.

Missouri S&T TBI projects funded through the LWI grants and the principle investigators are:

While the immediate concern of this TBI research is to address the military’s needs to protect soldiers and recruits, Tsatsoulis sees opportunities beyond military applications. The research could one day help medical personnel detect and treat brain trauma sooner. Because TBI is linked to long-term problems like dementia, Alzheimer’s disease or post-traumatic stress disorder, early treatments of acute brain trauma could prevent future chronic problems, he says.