Scientists have obtained the first image of a black hole, using Event Horizon Telescope observations of the center of the galaxy M87. The image shows a bright ring formed as light bends in the intense gravity around a black hole that is 6.5 billion times more massive than the Sun. This long-sought image provides the strongest evidence to date for the existence of supermassive black holes and opens a new window onto the study of black holes, their event horizons and gravity. Credit: Event Horizon Telescope Collaboration.

For the first time ever, scientists have captured an image of a black hole, and a Missouri S&T graduate played an important role. 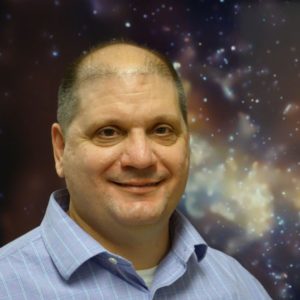 Dr. Frederick K. Baganoff, a research scientist at the Massachusetts Institute of Technology’s Kavli Institute for Astrophysics and Space Research, is among the collaborators on the international Event Horizon Telescope project to produce the first direct images of a black hole. Baganoff earned a bachelor of science degree in physics from Missouri S&T in 1985.

Baganoff and over 200 scientists worldwide announced this breakthrough on Wednesday, April 10, in a series of papers published in a special issue of Astrophysical Journal Letters. The researchers released four images of a supermassive black hole at the center of Messier 87, or M87. M87 is a galaxy within the Virgo galaxy cluster, 55 million light years from earth.

The images were taken by the Event Horizon Telescope (EHT), a global array of eight radio telescopes, each in a remote, high-altitude environment, including the mountaintops of Hawaii, Spain, Chile and the Antarctic ice sheet.

“We are honored and delighted that Dr. Baganoff spent his undergraduate years in Missouri S&T’s physics department and was a recipient of the University of Missouri Curators’ Scholarship,” says Dr. Stephen Roberts, vice provost and dean of the College of Arts, Sciences, and Business. “Missouri S&T continues to build on its impressive legacy of space science.”