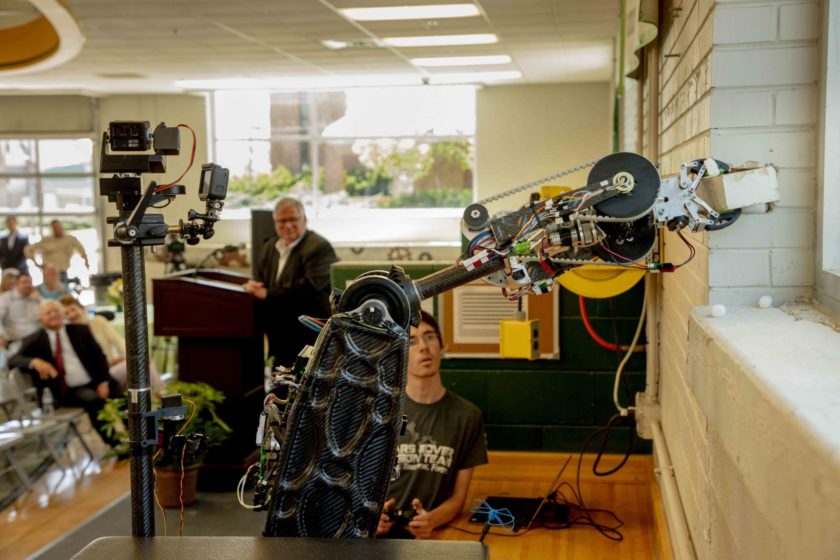 A Mars rover designed and built by students broke ground on an 8,000-square-foot expansion of the Kummer Student Design Center at Missouri S&T on Friday, April 26. The expansion will double the size of the design center, home of Missouri S&T’s 20 student design teams.

“We’ve been working toward this day for a long time and it’s great to finally be here,” says Dr. Chris Ramsay, assistant vice provost for student design and experiential learning, who holds bachelor’s and master’s degrees in metallurgical engineering from S&T. “Over the past eight years, we’ve grown from 10 to 20 student design teams, and the number of students on these teams has tripled to more than 1,200.”

The addition will expand the design center to the west of the current building, which was dedicated in 2011 after a $2.5 million transformation funded entirely by private contributions, including a naming gift from civil engineering graduate Frederick Kummer and his wife, June.  The expansion will include additional manufacturing and fabrication bays, a larger machine shop, upgrades to the welding, waterjet and composites labs, new labs for electronics and synthetic biology (iGEM), and a remodeled innovation suite.

“S&T students are known for their creativity and resourcefulness, and these skills are magnified by the design team experience,” says Joan Nesbitt, vice chancellor for university advancement. “There is nothing like applied problem solving to give students an edge in the real world. The hundreds of employers who visit S&T every year in search of talent are proof of that.”

The honor of breaking ground — or rather launching demolition on the build-out — went to the newest Mars rover designed and built by S&T students. Known as Valkyrie, the rover will compete next month in the international University Rover Challenge at the Mars Desert Research Station in Hanksville, Utah. S&T’s 2017 Mars rover, Gryphon, brought the world championship back to Rolla, and the 2018 rover, Atlas, defended the title by finishing second out of 36 international competitors and first among all North American universities.