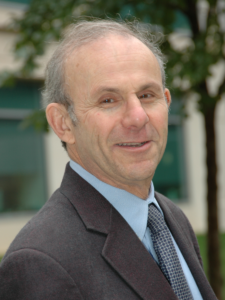 Dr. David Seidman, the Walter P. Murphy Professor of materials science and engineering at Northwestern University and an expert on high-strength materials known as “superalloys,” will deliver the 26th A. Frank Golick Lecture in Materials Science and Engineering at Missouri S&T at noon Wednesday, March 20. Seidman’s presentation will be held in Room 125 Butler-Carlton Civil Engineering Hall on the Missouri S&T campus. The lecture is free and open to the public. Refreshments will be served from 11:30 a.m.-noon.

In his talk, titled “Correlative study of the chemical and electrical dopants in ex-situ doped Si nanowires,” Seidman will discuss how research on the properties of atomic-scale materials known as nanowires has yielded unexpected results, and how his expertise has helped to advance understanding of these materials and their potential applications.

Seidman will also speak at the Missouri S&T materials science and engineering department seminar at 3:30 p.m. Thursday, March 21, in Planje Auditorium, 204 McNutt Hall. Missouri S&T students, faculty and staff are welcome to attend this seminar. Refreshments will be served beginning at 3 p.m. in the McNutt Hall Commons.

Seidman is known for applying field-ion microscopy (FIM), atom-probe FIM and atom-probe tomography to a wide range of scientific and technological problems. His current research is focused on superalloys – high-performance alloys that possess superior mechanical strength at high temperatures as well as good surface stability and corrosion resistance. Superalloys are widely used in extreme environments where tremendous heat or corrosion may occur, such as in power plants, aerospace applications, and the oil and gas industries. His current research includes efforts to develop high-temperature cobalt-based superalloys and high-temperature aluminum alloys.

Seidman is a member of numerous national and international scientific and engineering organizations, including the National Academy of Engineering, the EU Academy of Sciences, a fellow of the American Academy of Arts & Sciences, the American Association for the Advancement of Science, the American Physical Society, ASM International, TMS (Minerals, Metals and Materials) and the John Guggenheim Memorial Foundation. He has received the Gold Medal Award and Albert Sauveur Achievement Award from ASM International, the David Turnbull Lecturer Award of the Materials Research Society, the Alexander Von Humboldt Stiftung Prize, and the Max Planck Research Prize.

The A. Frank Golick Lecture Series at Missouri S&T is named after a 1918 metallurgical engineering graduate of the university, which was then known as the University of Missouri School of Mines and Metallurgy. The lecture series was created in 1969 through a memorial fund established by Golick’s widow, Loree, to attract nationally recognized metallurgical engineers to the campus to interact with students and faculty and to present a guest lecture.

Golick was associated with several ferrous and nonferrous metal producers during his early career. He developed a number of important new applications for both classes of metals before moving into the marketing field upon joining LaSalle Steel Co. in 1939.  His successful career in the steel industry resulted in his appointment as vice president for sales in 1946, a position which he held until his death in 1966.

During his long association with LaSalle, Golick pioneered the market developments of many cold-finished steels and developed successful sales campaigns, which established markets for several steels that are now widely used. During his lifetime he authored many technical articles relating to the use and treatment of steel.

For more information about the public lecture or Seidman’s visit to campus, contact the Missouri S&T materials science and engineering department at 573-341-4711 or matlsci@mst.edu.

On March 11, 2019. Posted in College of Engineering and Computing, email, Events, Materials Science and Engineering