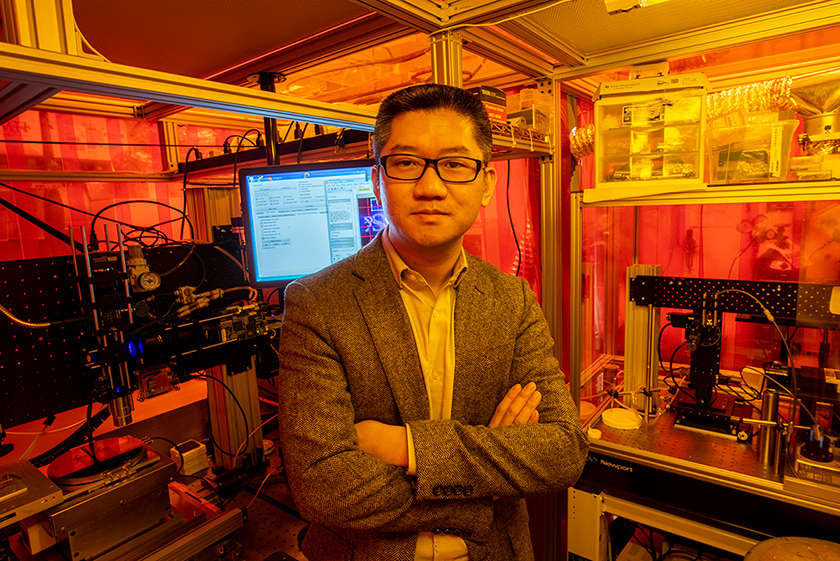 Dr. Heng Pan, assistant professor of mechanical and aerospace engineering at Missouri S&T, has received a big boost from the National Science Foundation (NSF) to support his efforts to create large-scale nanostructures from very small nanocrystals.

Pan received the NSF Faculty Early Career Development (CAREER) Award for his project, “Laser Direct Writing of Three-Dimensional Functional Nanostructures.” The five-year, $500,000 award will support his research to develop a new approach for direct fabrication of functional nanostructures from multiple materials. The research could lead to advances in solar cell and battery technology, nanophotonics (the study of how light behaves on the nanometer scale), and the development of metamaterials, which are materials engineered to exhibit properties not found in naturally occurring materials.

“We are enabling a new process to fabricate very large-scale, three-dimensional nanostructures with multiple materials integrated into the process,” says Pan.

This differs from the conventional approach of creating nanostructures from single elements, such as silicon, which is used to make semiconductors. Pan’s approach involves using multiple materials that can be written onto a surface through the use of laser “beamlets.” So instead of producing a nanostructure from a single element, researchers can produce nanostructures containing many elements.

The process is similar to the way a laser printer in an office might work. Instead of printing a single color – black ink on white paper – modern printers can produce documents in a variety of colors and gradients. Likewise, beamlets can “write” patterns with different materials and create new types of 3-D nanostructures at a large scale.

But first, Pan wants to better understand how the building blocks, known as nanocrystals, behave under certain conditions. Materials designed at this very small scale – a nanometer is one billionth of a meter –contain unusual properties, Pan says. They may have different mechanical, thermodynamic or optical properties compared with their bulk material counterparts. How nanomaterials interact with laser beamlets may also differ depending on different wavelengths of the beamlets. A shorter wavelength may affect an element differently than a longer one.

Pan’s research could also lead to advances in a variety of nano-devices, including nanostructured solar cells, batteries and nanostructures that could be used to split water to free up hydrogen for use as a fuel source.

Pan’s CAREER Award will support his efforts to better understand the “laser-nano interactions” that are the key to the success of the new fabrication process.