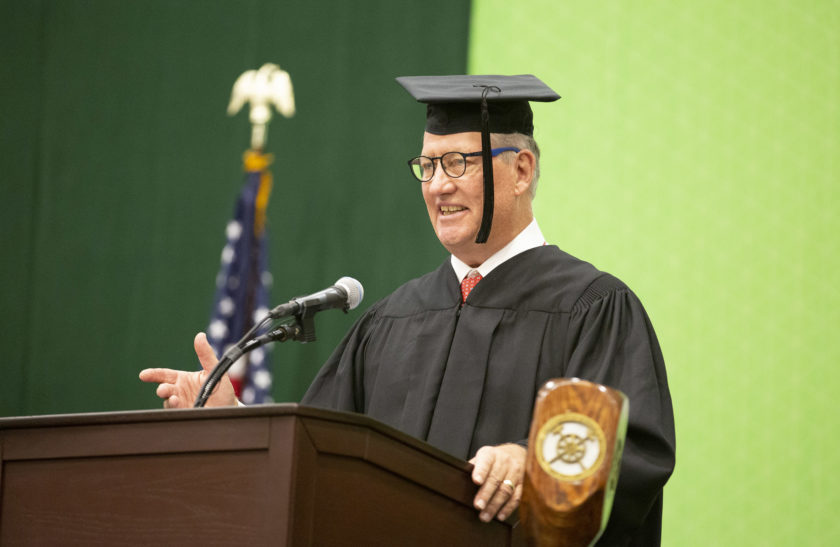 “You must make a lifelong commitment to continued learning,” said Suellentrop. “Continue to deepen your craft, become more of an expert, continue to learn and gain expertise in subjects outside your chosen discipline and broaden yourselves. This pursuit of learning in the fullness of time will bring you a much more informed perspective of your role in the various phases of your career.”

Suellentrop earned bachelor of science and master of science degrees in petroleum engineering from Missouri S&T in 1974 and 1975, respectively, and he played on the Miner football team. During the ceremony, he was awarded the doctor of engineering, honoris causa.

“All of you have received the finest university education possible. Trust me. This is the truth. You have mastered your discipline and are ready for the next steps,” said Suellentrop.

He encouraged students to learn about themselves and become better collaborators – especially if they hoped to lead teams in the future.

“Strengthen your ability to collaborate with all you encounter. This learning and growth will provide insight and the capability to partner effectively with others both within and outside of your immediate sphere of influence,” said Suellentrop. “As you continue your learning, you will be given opportunities to influence and eventually lead high-performing teams.”

He encouraged graduates to take full advantage of career opportunities that arise when least expected and to focus on what’s most important in their lives.

“Find your center – whether it be family, friends or faith – find it! Find this center and hold on to it tightly. This is where you will find your purpose,” said Suellentrop. “This is where you can go during long periods of uncertainty or stress. Ultimately, you will find that your center is the reason you started on this adventure called a career. It is the place you will return to at the end of the adventure, at the end of your career.”

In 1991, Suellentrop accepted the position of vice president of engineering at ARCO International Inc., where he led negotiations for entry into the country of Algeria and the redevelopment of the Rhourde El Baguel Field. In 1994, he transferred to Guildford, England, as managing director of ARCO British Ltd. In 1999, he returned to Dallas as vice president of the Technology and Operations Services group. Suellentrop left ARCO in May 2000 at the conclusion of BP’s acquisition of the company.

In May 2000, Suellentrop joined the privately owned Hunt Oil Co., assumed responsibility for representing Hunt in the development of the Block 88 license in Peru and took a lead role in structuring the Transportadora de Gas del Peru (TGP) company. In 2001, he initiated the pursuit of a liquefied natural gas (LNG) project in Peru. He also led the team that designed and constructed the Peru LNG facility along with an accompanying 400-kilometer pipeline across the Andes, certified as the highest operating pipeline crossing in the world and crossing the Andes at over 14,000 feet, and participated in securing over $2 billion in financing.