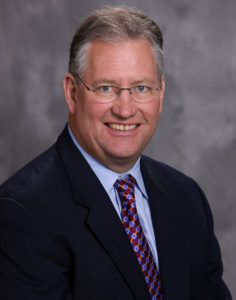 Stephen G. Suellentrop of Dallas, chairman of Hunt Oil Co. and Hunt Refining Co., will speak at two commencement ceremonies at Missouri S&T this month. Suellentrop earned bachelor of science and master of science degrees in petroleum engineering from Missouri S&T in 1974 and 1975, respectively.

The first ceremony will be held at 10 a.m. Saturday, Dec. 15. During the morning ceremony, approximately 430 degrees will be presented to graduate and undergraduate candidates in the departments of biological sciences; chemical and biochemical engineering; chemistry; civil, architectural and environmental engineering; economics; engineering management and systems engineering; English and technical communication; geosciences and geological and petroleum engineering; materials science and engineering; physics; and psychological science.

The second ceremony will be held at 3:30 p.m. Saturday, Dec. 15. During the afternoon ceremony, over 360 degrees will be awarded to graduate and undergraduate candidates in the departments of arts, languages and philosophy; business and information technology; computer science; electrical and computer engineering; history and political science; mathematics and statistics; mechanical and aerospace engineering; and mining and nuclear engineering.

Suellentrop joined ARCO in May 1975, first in Corpus Christi and Houston, Texas, and then in Midland, Texas. In 1980, he transferred to Anchorage, Alaska, to join the Equity Redetermination Team to determine ARCO’s final equity position in Prudhoe Bay Unit and then served as reservoir engineering manager in the early development of the Kuparuk River Field. He returned to Midland in 1985 and in 1988, transferred to Bakersfield, California, as engineering manager to support the integration of Tenneco California into the ARCO platform.

In 1991, Suellentrop accepted the position of vice president of engineering at ARCO International Inc., where he led negotiations for entry into the country of Algeria and the redevelopment of the Rhourde El Baguel Field. In 1994, he transferred to Guildford, England, as managing director of ARCO British Ltd. While in this position, he also served as president of the UK Offshore Operators Association. In 1999, he returned to Dallas as vice president of the Technology and Operations Services group.

Suellentrop left ARCO in May 2000 at the conclusion of BP’s acquisition of the company. In May 2000, he joined the privately owned Hunt Oil Co., assumed responsibility for representing Hunt in the development of the Block 88 license in Peru and took a lead role in structuring the Transportadora de Gas del Peru (TGP) company.

In 2001, he initiated the pursuit of a liquefied natural gas (LNG) project in Peru. In the process, his team secured requisite development licenses from the government of Peru, a gas purchase agreement with licensees, partnership agreements to create the project structure and a financially viable LNG sales agreement, which permitted the positive final investment decision in December 2007. He also led the team that designed and constructed the Peru LNG facility along with an accompanying 400-kilometer pipeline across the Andes, certified as the highest operating pipeline crossing in the world and crossing the Andes at over 14,000 feet, and participated in securing over $2 billion in financing.

Peru LNG was the largest private investment in Peru’s history. First cargoes for the project were loaded June 2010. During this period, he also represented Hunt’s interest in the development of the Yemen LNG project operated by Total of France.

On December 6, 2018. Posted in College of Engineering and Computing, News, People