‘Paleo Joe’ to talk about dinosaurs on S&T campus, at Rolla Public Library 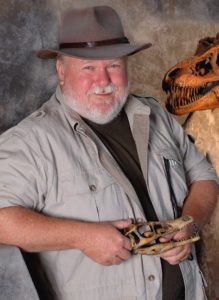 Award-winning paleontologist Joseph J. Kchodl, better known as “Paleo Joe,” will discuss “Digging for Dinosaurs in Utah” at 4 p.m. Wednesday, Oct. 24, on the Missouri S&T campus. The talk will be held in Planje Auditorium (Room 204) of McNutt Hall and is open to the public.

Kchodl will also present “Dinosaur Day with Paleo Joe” at 6 p.m. Thursday, Oct. 25, at the Rolla Public Library, 900 N. Pine St. That event is also open to the public.

Kchodl combines his love of dinosaurs and fossils with his passion for storytelling in presentations for a broad variety of audiences. Dressing and playing the part of a “digger,” he has presented programs around the United States, speaking to elementary and middle school children, the public, university audiences, and rock and mineral societies.

A native of the Niagara Falls area of New York, Kchodl has enjoyed collecting fossils from his youth. By the time he graduated from Niagara University with a degree in education in 1979, he had assembled a collection of marine invertebrates from the Niagara area and, prior to entering the Army that same year, donated the collection to the Schoellkopf Geological Museum of Niagara Falls.

Since moving to Midland, Michigan, in 1993, Kchodl has taught classes on fossils in many Michigan elementary and middle schools. He also taught a course called “Family Fossil Fun” and developed that curriculum into a 14-episode television series for Midland TV station MCTV.

Kchodl’s visit to Missouri S&T is sponsored by S&T’s department of geosciences and geological and petroleum engineering (GGPE). Also during his visit, he will hold a “Dinosaur Day with Paleo Joe” at Truman Elementary School and meet with Missouri S&T students.

On October 17, 2018. Posted in College of Engineering and Computing, email, Events