Posted by Delia Croessmann
On September 12, 2018

Missouri S&T will officially dedicate the “Rolla Mural,” a work of art that depicts more than 100 years of local history, during a public ceremony at 4 p.m. Thursday, Oct. 4, followed by a reception on the second floor of the Curtis Laws Wilson Library at 400 W. 14th St. on the Missouri S&T campus in Rolla. The event is open to the public.

The Rolla Mural, a 22-foot-by-5-foot painting by Missouri artist Sydney Larson, was donated to the university by the family of Edward W. (Eddie) Sowers and his wife, Alma Sowers, the original owners and publishers of the Rolla Daily News who commissioned the artwork in 1952. The mural hung in the Rolla Daily News building at 101 E. 7th St. since its unveiling in 1953 by Walter H. Toberman, Missouri’s secretary of state at the time.

The Sowers family donated the mural to Missouri S&T in 2016. It is now installed on the second floor of S&T’s Curtis Laws Wilson Library after a meticulous process of removal, storage, installation and restoration.

“Missouri S&T is very grateful to receive this historical piece from the Sowers family,” says Dr. Christopher G. Maples, interim chancellor. “It will quickly become a landmark on our campus, both aesthetically and as a point of interest and identification for students, faculty and alumni.”

The mural speaks of American progress 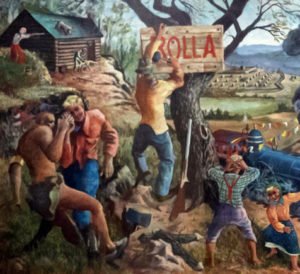 Eddie Sowers was the first of 10 children born to William and Alice Staley Sowers. He grew up on Missouri farms and earned a degree in journalism from the University of Missouri-Columbia (MU) in 1928. In his lifetime, Sowers was editor or owner and publisher of 10 Missouri newspapers. In 1942, he and two silent partners bought the weekly Rolla New Era. Sowers soon bought out his partners and reorganized the paper as a five-day daily, the Rolla Daily News, and in partnership with his wife and three sons, continued to publish it until his death in 1982.

Sowers’ family remembers him as a proud American who wanted the mural to influence people for the good of the country — someone who wanted the Rolla community to understand and appreciate the progress it had made since its pioneer settlement. 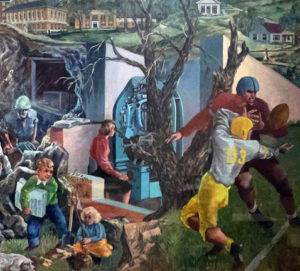 Detail of references to “School of Mines” from right side of Rolla Mural. Photo by Sam O’Keefe/Missouri S&T.

Artist Sydney Larson painted the Rolla Mural when he was 30. It was his fourth commission of this type. A St. Louis native, Larson served four years in the U.S. Navy, participating in the invasion of Iwo Jima and Okinawa. He earned a master of arts in fine arts from MU in 1950.

Larson was influenced by Thomas Hart Benton, a painter, illustrator and lithographer from Neosho, Missouri, who worked in the Regionalist style and became widely known for his murals. Benton believed his mural, “A Social History of Missouri,” which hangs in the Missouri State Capital in Jefferson City, to be his best work and asked Larson to restore it and to assist him with the murals on display at the Harry S. Truman Presidential Library and Museum in Independence, Missouri.

Larson served 44 years as curator of the art gallery at the State Historical Society of Missouri. He was also director of the art department at Columbia College. Born in 1923, Larson died in 2009.

Mike Bassett, facilities operations supervisor at Missouri S&T, spearheaded the mural installation project. “This has been a wonderful project,” says Bassett. “I was so privileged to be involved as caretaker of the painting for the period of time of getting it from the news building to the campus. It’s the only pictorial representation we know of about Rolla’s history.”

Even though the artwork is on one canvas, the canvas was attached with a lead fixative to a support made from two-and-a-half ping pong tables tightly bolted to the east interior wall of the Rolla Daily News building. The total piece weighs an estimated 500 lbs.

Bassett and his team devised a custom-made saw blade and truss-type framework that encompassed the mural during its removal and reinstallation, allowing it to be removed in one piece with no damage. To remove it from the building, they had to take out the walls and ceiling of the newsroom where the mural hung, then rebuild the room. At Missouri S&T, windows in the library’s upper floor had to be removed and reinstalled to aid the mural’s installation.

“The aesthetics of the S&T Rolla Mural exhibit don’t reveal the conscientious efforts of everyone involved to relocate the piece,” says Bassett. “Every artisan who touched this project views their work as a personal contribution to the preservation of an important piece of history.”

The Rolla Mural was restored and conserved onsite in the library over a two-and-a-half month period by Rolla native and American artist Dan Woodward. As a realist, like Larson, Woodward is well known for his historical paintings, particularly of Civil War scenes. Woodward has painted and seen the world as a soldier in Vietnam and as a teacher in California, the Middle East and China.

“Dan Woodward is the man for the job from a historical perspective,” says Luce Myers, lecturer of art at Missouri S&T. “He is so diligent in matching the colors and the direction of the brushstrokes, using the mediums Larson used 65 years ago.” The Rolla Mural was painted with casein, a water-based emulsion that preceded acrylic paints. Woodward’s painstaking restoration involved cleaning the entire piece by hand so that his color matching would be accurate and applying an egg-based varnish at the end. 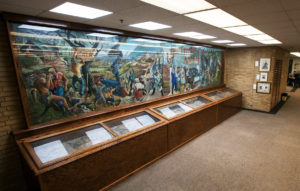 In the S&T library, the mural is encased in glass and sits on top of three hand-crafted oak cabinets, designed and built by Bassett’s team of craftsmen. The exhibit includes museum-quality, interpretive descriptions for the 19 iconic scenes Larson illustrated to tell the story of Rolla’s history — from 1844 when the first cabin was built and an Indian and settler arm wrestle — up to the early 1950s where two football players wrestle for the ball as a “School of Mines” student drills in the experimental mine next to a map-making machine that represents science and engineering.

“We are fortunate to have a painting that tells the community a story about the connections between Rolla and the university,” says Myers. “The combined influences of Benton, Larson and Woodward create an artistic lineage of Missouri history. The mural helps us understand where we’ve been and where we are today.”