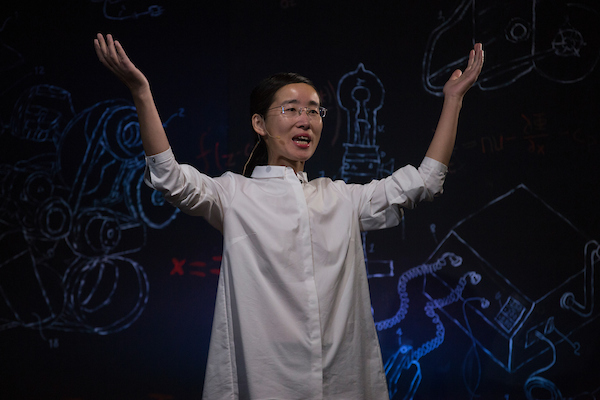 Growing up in northeast China, Dr. Guirong (Grace) Yan didn’t see many tornados in a country where the number of documented twisters is a fraction of those that hit the United States.

But as her academic career took Yan to several postdoctoral fellowships and then faculty positions in Indiana, Missouri and Texas, the assistant professor of structural engineering at Missouri S&T gradually found her calling.

“Our mission is to make Tornado Alley safer,” Yan says of the unofficial geographic designation that encompasses Texas, Oklahoma, Kansas, Iowa, Missouri and other parts of the central U.S. “We realized our research may not change people’s lives until we awaken the entire community to work together.”

She’s built two small-scale tornado simulators that use toy models to mimic the destruction of high-speed twisters and hopes to build a large-scale simulator that she envisions will make S&T a global leader in her field. According to Yan, S&T would join Iowa State University and Texas Tech University as the only U.S. universities with simulators of similar size and scope, but with the advantage of being a mobile unit.

Public safety ─ and preparedness — is central to Yan’s work. That mission is what prompted her to present a TedXMissouriS&T talk on the vitality of tornado preparation earlier this year.

While her research typically relies on complex mathematical models to measure the correlations between varying tornadic wind patterns and infrastructure resiliency, Yan relied on a pair of analytical observations more commonly invoked in fields such as cognitive psychology, economics or political science — prospect theory and game theory — during her public presentation in the spring semester.

In prospect theory, researchers have found that people are more willing to endure certain-but-smaller financial losses than take the lesser risk of losing a larger amount all at once, Yan explains. So in that scenario, paying an annual $5,000 insurance premium over 30 years for a total of $150,000 is still more preferable than a one-time loss of the same amount, she says.

But those behavioral patterns are also influenced by other human factors, such as complacency. To that end, Yan is working to develop a virtual reality animation experience that would allow users to realistically determine how their homes would fare in a tornado.

“Based on prospect theory, to convince individuals to structurally reinforce their homes, the key is to inform them of the significant losses induced by tornadoes,” she says. “You can see the wind flow, and you can see how your house is impacted.”

Yan is also tapping game theory — the study of mathematical models of conflict and cooperation among those with competing and overlapping interests — to promote tornado resistance on a broader scale.

There’s perhaps no place in the U.S. where that message would resonate more than Joplin, the southwest Missouri city 180 miles from Rolla where 161 people died and thousands of buildings were destroyed in an EF-5 twister in May 2011 that ranks among the country’s deadliest and costliest. Overall, 84 percent of tornado-related deaths are due to building and structural failures.

“The possibility of a tornado occurrence is very, very low, that’s true,” Yan notes. “So you are always thinking a tornado will never come. But once it comes, you have nowhere to hide.”