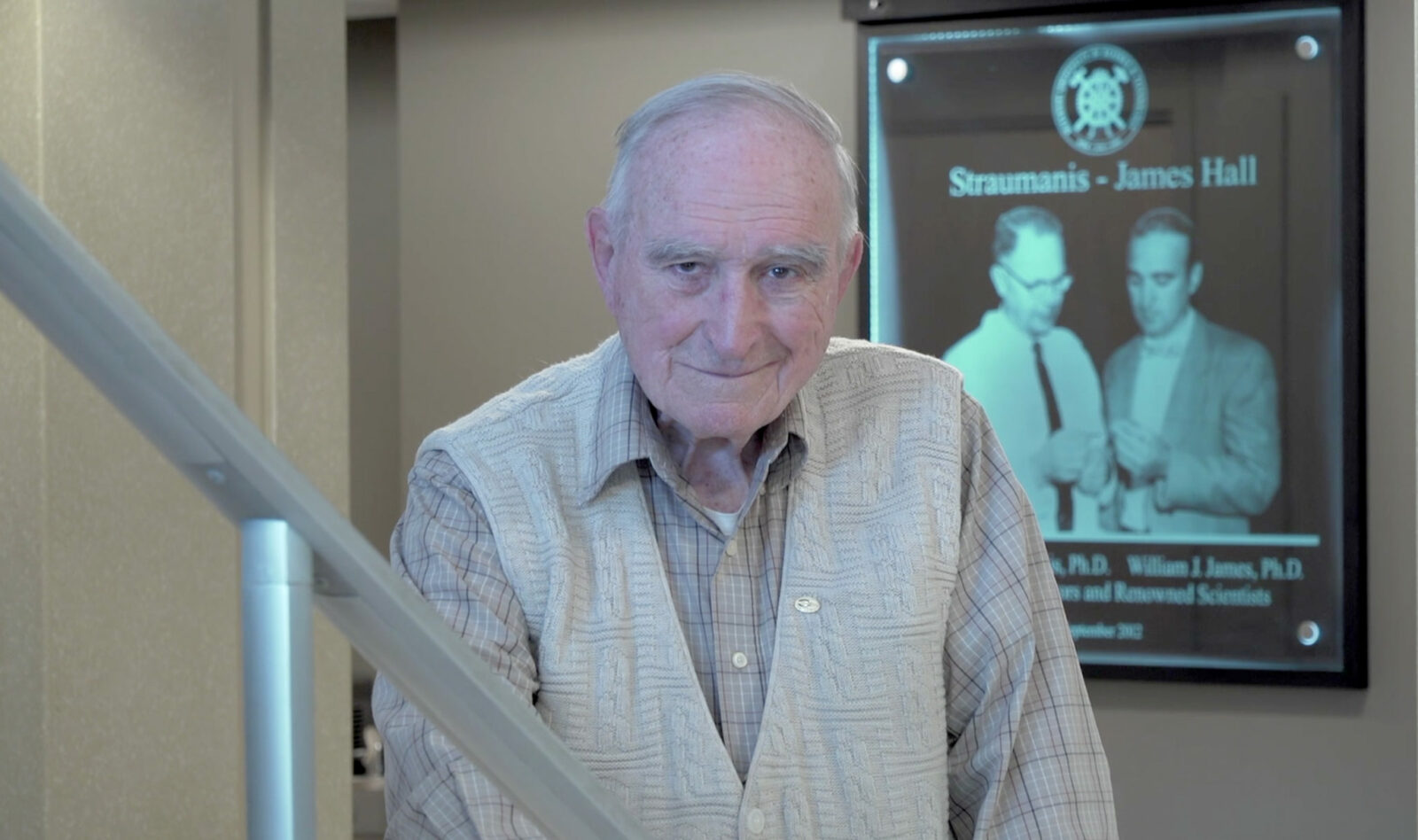 Dr. Bill James stands in front of a plaque depicting him and former colleague and friend Dr. Martin Straumanis in the research building named for the pair. Terry Barner/Missouri S&T

Despite spending the past 65 years in Rolla, Bill James’ thick Maine accent remains intact. He credits the links between two seemingly dissimilar locales for luring him to campus as a newly minted Iowa State University Ph.D. back in 1953.

“I thought it was beautiful,” he says of arriving in the Missouri Ozarks from Ames, Iowa, where the World War II veteran earned his master’s and doctoral degrees in chemistry after receiving his bachelor’s degree from Tufts University near Boston. “The hills reminded me a bit of New England, where I grew up.

“In Ames, it was a nice location, and a very good school,” James says. “I enjoyed my time there, but when it came to scenery, all you would see is corn. It’s just flat. There weren’t very many trees.”

That decision would mark the start of a distinguished academic career highlighted by receiving the university’s first National Science Foundation research award, playing a key role in the formation of a Ph.D. program in chemical engineering, and establishing, in 1964, one of the university’s first research centers, the Graduate Center for Materials Research.

That center is now known as the Materials Research Center, which is housed in Straumanis-James Hall, a building that was renamed in 2010 in honor of the emeritus professor and his late friend and colleague, Martin Straumanis, a former professor of metallurgical engineering who died in 1973.

At 95, James continues to keep an office in his namesake building, consulting with former students on research projects related to his specialty of crystallography. In a nearly three-hour conversation, he vividly recalls the particulars of both his childhood and his time at the Missouri School of Mines and Metallurgy, University of Missouri-Rolla and now Missouri S&T — including a savvy recruitment effort by Dr. Walter Schrenk, for whom Schrenk Hall is named.

Schrenk knew that James was an avid fisherman (James learned the sport while being raised by his grandparents in Kennebunkport, Maine so his mother could work during the Depression). Eager to sell James on an assistant professor’s job that paid $3,200 a year, Schrenk touted the Ozarks’ abundant streams and rivers with some firsthand evidence.

“He actually had a fish in his office refrigerator, all wrapped up in newspaper, that he pulled out,” James recalls of his job interview. “He was prepared. And I was impressed. It didn’t hurt any, in terms of helping me make up my mind.”

Follow this link to hear more musing from James (and his wicked New England accent).